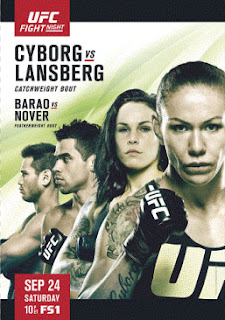 UFC Brasilia will be held on September 24, 2016 at Ginásio Nilson Nelson in Brasília, Brazil.

Strikeforce Women's Featherweight and current Invicta FC Featherweight Champion Cristiane “Cyborg” Justino will be stepping into the octagon with Lina Lansberg in a main event bout.

Our very own and TUF alumni Phillipe Nover will square off with the former UFC Bantamweight Champion- Renan Barao will provide him with his biggest test of his career. Does 'The Baron' still has what it takes to become champion once again?

On August 13, four fighters got injured. The card made multiple changes. Brandon Thatch and Shinsho Anzai pulled out of their respective fights against Erick Silva and Luan Chagas. Silva and Chagas are now expected to face each other. Renato Moicano and Joaquim Silva also pulled out of their respective fights against Mike De La Torre and Gregor Gillespie. Their replacements were Godofredo Pepey and The Ultimate Fighter: Brazil 3 winner Glaico França.