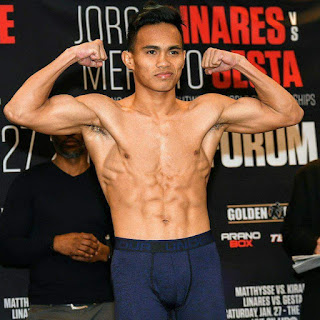 CURRENT WBC Youth Inter-continental lightweight champion Romero “Ruthless” Duno of the Philippines and his Mexican opponent Yardley Armenta Cruz also known as Yardley Suarez both made their weights today during their official weigh-in held at the Renaissance Hotel in Los Angeles, California.

They are fighting for eight rounds only tomorrow at the Forum in Inglewood, California in the undercard of the double world championship card promoted by Oscar De La Hoya of Golden Boy Promotions.

It will be televised by USA HBO, Latin America: Canal Space and Panama RPC Channel 4.
“I’m ready to go to war. I will do my best for my country,” said Duno, who is making his third fight in the US under the Golden Boy Promotions.

Duno’s manager Dexter Tan and Sanman Promotions Chief Executive Officer Jim Claude “ Manangquil are now both also in the US to give their moral support.

“Duno is now in great shape. I hope he wins again,” said Tan.

The 22-year old Duno previously won by a unanimous decision against another Mexican Juan Pablo Suarez last Sept. 23 at the Forum.