Gilas Pilipinas chances in FIBA World Cup: slim to none 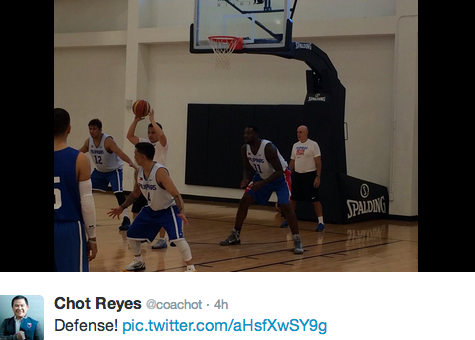 There are 2 things that the Filipinos hold advantage coming in to the FIBA Basketball World Cup, heart and fans support. We know we still lack the size, athleticism and experience in the world arena but it does not mean that we won't try. Its been a long time since the Philippines got the opportunity to play in FIBA world cup and the country is nothing less than excited of the chance to see our national team slug it out against powerhouse teams in the world.

Winning games however is a different story, imagine being in the same bracket as Argentina, Greece, Croatia, Senegal and Puerto Rico.  That being said, this would be a tough division to win games, well actually every other divisions is tough for the undersized Filipino.

Chot Reyes the head coach of the Gilas Pilipinas said in his recent interview at Philstar.com that the chances of the team in the World Cup are zero to none. Fans should not expect anything.

It is a sad reality that Filipino fans must face and while we are consider on of the best basketball fans in the world and a true basketball country it is evident that we still need to cover a lot of grounds to be able to consistently improve and be consider a basketball power in the world.

I'll tell you what to expect though, Filipino fans glued to their television set watching all the Gilas Pilipinas games whether they are winning or losing, expect a lot of excitement and cheers from Filipinos across the globe and when the Philippines finally get eliminated, we would still be watching because we love the sports and like most Filipinos, I am definitely sure they want to see team USA play.

In the end, its a win win situation, it has been awhile since FIBA world has been hyped in the Philippines like this so lets all just enjoy it.