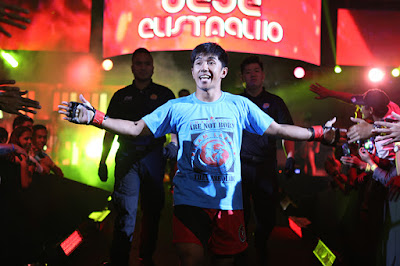 Known as one of the most highly-skilled striking specialists in the Philippines, Team Lakay's Geje "Gravity" Eustaquio has faced some of the best fighters in the ONE Championship ranks. His ability to stay in the pocket and nullify an opponent's offense is perhaps the most deliberate  of any fighter in the promotion. That unique striking advantage that Eustaquio possesses will come in handy in his next bout.

Eustaquio (RECORD) will return to the ONE Championship cage on Friday, 2 December at the Mall of Asia Arena in Manila, Philippines. He will take on Finnish fighting sensation Toni "Dynamite" Tauru (RECORD) in a three-round bantamweight contest on the main card of ONE: AGE OF DOMINATION.

Eustaquio says he feels great and that training camp has been one of the toughest and most satisfying yet.

"My conditioning is on point. We are at ninety percent right now. By fight week we'll be at a hundred percent and I'll be ready," said Eustaquio.

"There's no more weight-cutting. Fighters fight at their walking weights which makes it so much easier to focus on training and getting better for the next one."

Eustaquio has been campaigning as a flyweight in ONE Championship for most of his career. He began his rise through the ranks with a comprehensive victory over grappling specialist Alex Silva nearly four years ago. In 2014, Eustaquio challenged then champion Adriano Moraes for the ONE Flyweight World Championship belt.

Since ONE Championship revamped its weight management policies, Eustaquio made the move up a division higher to 135-lbs. which is around his natural walking weight.

Although the results have been positive, Eustaquio says he misses the power he had as a flyweight and is now mulling a move back down.

"I went up to bantamweight to try to test the waters. I had a pretty good experience. But I think I am a lot stronger as a flyweight," said Eustaquio.

"I plan to end the year at bantamweight and by 2017, drop back down to flyweight."

Yet before Eustaquio can even think about shifting weight classes, he will have to handle the man standing in front of him. Tauru, a grappling specialist, has 10 wins on his professional record. Seven of those 10 victories have come impressively by submission.

But despite Tauru's daunting submission credentials, Eustaquio feels it's time to see if Tauru can take the heat from a fluid striker such as himself.

"[Toni Tauru] likes to throw a lot of punches but I don't think he is all that accurate," said Eustaquio. "That's probably one weakness that I think I can exploit a little bit. Obviously I like to strike, so I will try to test his ability in a striking battle."

However, since mixed martial arts is a combination of striking and ground fighting, bouts usually end up on the mat one way or another. If the fight indeed does head to the ground, Eustaquio says he is confident enough to handle even a fighter as skilled as Tauru.

"We all know that the weakness was the grappling," said Eustaquio about Team Lakay's perceived lack of grappling skills.

"We just weren't on the same level as our international opponents. But through everyone's hard work, everyone on the team, now I think we are getting closer to their level, in terms of grappling," he added.

ONE: AGE OF DOMINATION is set to light the Mall of Asia Arena stage ablaze with exciting, world-class MMA bouts. The card is headlined by Brandon "The Truth" Vera who defends his ONE Heavyweight World Championship belt against Japanese MMA legend Hideki Sekine.