Here is One Sign That LeBron James is Definitely Leaving Cleveland

All signs lead to LeBron James Leaving Cleveland, and this is one of 'em 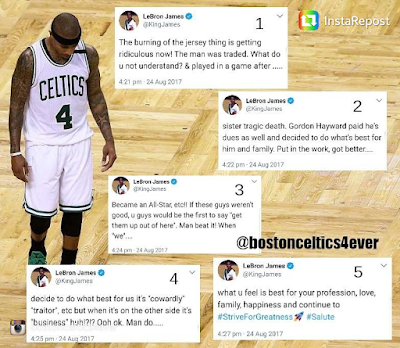 LeBron James is still arguably the best basketball player on the planet today. At 32, he has not aged a bit and has continued to dominate and improve. Last year, he averaged about 26 points on 55% FG, grabbing almost 9 rebounds and assists with 1 steal game. Truly LeBron James has been able to sustain his career and his health. He has become one of the most influential people in and outside the court. What he says matter.

And while his basketball career and achievements are spectacular there will always be issues revolving him. Critics will always have something to say and will always look for faults. And recently, LeBron James has come out defending not only himself but other basketball players that have been traded or signed with other teams.

We all knew that Kyrie Irving requested a trade and when it finally did happen, the Cleveland Cavaliers decided to deal with their eastern conference rival, the Boston Celtics. Not a lot of people saw this coming, this includes Boston Celtics point guard Isaiah Thomas himself.

While the two players involved in the trade has been relatively quiet, the fans, however, has been vocal about the trade and it was ugly, especially when ignorant fans burned the jersey of Isaiah Thomas.

Sister tragic death, Gordon Hayward paid he's dues as well and decided to do what's best for him and family.

Put in the work, got better. Became an All-star etc!! if these guys weren't good, u guys would be the first to say" get them out of here". Man beat it!

Is he defending Isaiah Thomas or the players that signed with different teams or is he piling up reasons for his defense for a potential departure next year?

From the cover, it looks really nice standing up for your fellow team mates but if you dig deeper the message could also be interpreted differently, especially with the rumor about him leaving the Cavs.