3 Things Ginebra Needs to Do to Beat SMB

These things will help Ginebra against SMB 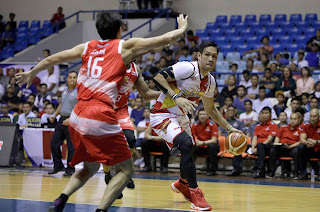 Over the weekend, both the Barangay Ginebra Gin Kings and the San Miguel Beermen lost their respective games to end the elimination round which explains their positions heading into their higly-anticipated quarterfinal match-up.

The Gin Kings had the chance to go for the number 1 spot but the Talk N Text Katropa denied the crowd darlings and instead, Ginebra was relegated to 3rd place.

On the other hand, the Beermen had the chance to finish in the Top 4 and get that twice-to-beat advantage but thanks to a stunning defeat at the hands of the Meralco Bolts which saw the Bolts come back from an 18-point hole, June Mar Fajardo and the rest of the Beermen fell to 6th place and have to beat the Gin Kings, twice, to be able to move on to the semifinals which will keep their hopes for a grand slam alive.

For the Gin Kings who are aiming for a back-to-back Governors' Cup championships, a win against their sister team on Wednesday will enable them to prepare for whoever they will face come the semifinals. However, we all have to keep in mind that San Miguel has already beaten Ginebra earlier this month when Terrence Watson made his debut in a game where he scored 28 points and grabbed 17 rebounds to lead the Beerman to a 107-103 victory over Ginebra last September 10. That victory halted the Gin Kings' 7-game winning streak.

Now, equipped with the twice-to-beat incentive, the Gin Kings know that letting the Beermen build up any form of confidence when the two teams clash anew come Wednesday is not an option because whether we like it or not, the Beermen have been in this situation where they needed to win successive games against a team. Remember? They won 4 straight against the Alaska Aces in the Finals to win the championship after being down 0-3. So, winning two straight game is, let's say more doable for a team of the Beermen's calibre.

If you're Tim Cone, you wouldn't think about having the twice-to-beat edge. If Ginebra wants a longer rest before the semifinals, dealing with the Beermen in one game is a must. Below are the three important things that Justin Brownlee, Japeth Aguilar and the rest of the Gin Kings need to do come Wednesday:

As they all say, "Defense wins championships" and since they are the defending champions for this conference, the Gin Kings must rely on their defense if they want any hopes of stopping Watson or at the very least, June Mar Fajardo who is playing like an import for San Miguel. However, one strength of the Beermen that Ginebra needs to overcome is that the team of Coach Leo Austria is also loaded with long-distance snipers who can drop threes especially when left unguarded. They have guys like Alex Cabagnot, Chris Ross, Marcio Lassiter and even Arwind Santos who can make those long jumpers as if they're only lay-ups.

Even though San Miguel is only making 19% of their attempts from rainbow country during the elimination round, Ginebra should make sure that they defend the shooters of San Miguel. And, don't forget to defend Fajardo as well. Basically, choosing between sending a double-team or even a triple-team to defend Fajardo and, closing in on the shooters is a gamble and a headache for any team who is facing San Miguel and that what makes them the best all-local team that we have in the league right now.

There's simply no way Ginebra can eliminate the Beermen when only two players doing the job as we saw in Ginebra's loss to TNT where only Justin Brownlee and Japeth Aguilar scored in double figures. They are dealing with a San Miguel team which has the best starting unit to begin with and they have the best player in the league in June Mar Fajardo.

The rest of the Gin Kings must find a way to contribute in other way when they are struggling offensively. For starters, LA Tenorio's leadership on the floor will be needed so is the athleticism of Scottie Thompson. Greg Slaughter also needs to find a way to make his presnece felt to take off some defensive pressure away from Brownlee and Aguilar. And speaking of Aguilar, he has to score more points now that he has ended a series of scoreless games which can benefit the Gin Kings because this will mean that Brownlee won't need to take majority of the scoring load.

With or without the twice-to-beat edge, Ginebra must remain hungry for the win no matter how challenging the task of defending and defeating San Miguel. Ginebra has been known, loved and even hated for their "Never Say Die" mentality which means that they never give up against all odds.

If anything, Wednesday will be the perfect time for the Gin Kings to go back to that mentality because playing against a deadly team like San Miguel will require more than just the talents and skills. It requires the heart to go on fighting and when it comes to this, no better team does this other than Ginebra, right?