Fact: TNT is Still for Jayson Castro to Lead 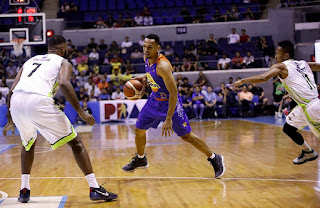 Photo by the PBA Media Bureau

The Blur's performance against the Batang Pier just proves it

The Talk N Text KaTropa may have gained another superstar *slash* scorer but come gametime, the ball would still go to their main man, Jayson Castro.

Or at least, that was the case in TNT's 128-114 opening game victory over the Global Port Batang Pier in Terrence Romeo's debut with his new team.

While many were excited that Terrence Romeo's arrival brings back memories for TNT when a young Jayson Castro came in and learned from the one and only, Jimmy Alapag, this trade is different from the situation during Alapag's time with Castro. And Castro is certainly a different student compared to the new guy, Terrence Romeo.

And it showed in their first game to open the PBA Commissioner's cup which saw many shovings, alterations and yes, tons of technical fouls that were whistled on both teams.

Sure, Terrence Romeo scored 11 points against his former team but that took him 13 shots where he only nailed 4 of them. Mind you, Nash Racela started Romeo while Castro came off the bench. So who played more efficiently?

The Blur led the KaTropa in scoring like he always does- scoring 21 points on 5 for 9 shooting including 3 for 5 from the three-point line. He was flawless in his 8 attempts to the free throw line He also had 10 assists and 6 rebounds to cap off the opening day victory.

Conclusion: Terrence Romeo will get better but Castro will still lead TNT

At the end of the day, Terrence Romeo can only get better with his new team from this point on because he has Jayson Castro as his mentor. And whether we like it or not, there will be a time in the future when Jayson Castro will pass the torch to Romeo but until then, Castro will still lead the KaTropa and Terrence Romeo will just need to learn from the best point guard in Asia.
Labels: Basketball Global Port Batang Pier Iggy jayson castro pba commissioner's cup terrence romeo TNT Katropa