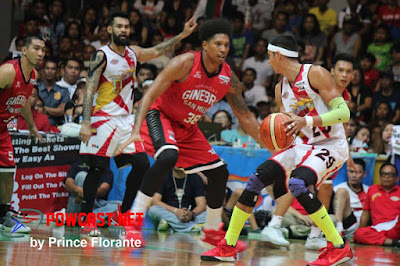 What is the definition of a hero?

Sometimes, it's someone who saves the day, sometimes it's Joe Devance.

After a disheartening game 1 loss to the San Miguel Beermen, the team was probably left wondering if they can really triumph against the mammoth that is SMB. It was really horrible for Ginebra from start to finish that night. The score was wrapped up at 109 - 82.

Is it a mismatch?

Ginebra answered that question early as they surprised SMB with a scorching start and making a statement scoring 67 points in the first half and rousing the big crowd inside the Quezon Convention Center in Lucena at yesterday's game. We thought it could be an easy victory for the Barangay until the Kings helplessly staggered in the third quarter allowing the Beermen to catch up.

That's when the Kings needed someone to step up.

Joe Devance was that guy nailing 3-pointers in the crucial minutes of the game and taking it upon himself to make a move in the dying seconds of the game to take it to overtime. The score did not come easy as he was blocked from behind and had to pick up the ball and release it again on time for the buzzer. What a presence of mind.

Although responsible for some critical errors, he fought back and never lost his compusure. He has shown his never die spirit and without Joe Devance Ginebra may have faltered that day.

Joe Devance ended up with 16 points, 7 out of 10 shooting from the field and 7 rebounds.


Joe Devance is the real hero of game 2!