Bouncy Thoughts: Who's the Better one, Japeth or Gregzilla? 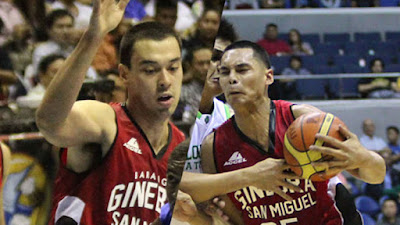 We always compare Ginebra's twin towers Japeth Aguilar and Greg Slaughter to other players in the league that's starting to arise. They are always the point of comparison.

Now it would be even more interesting if we compare them to each other and see who's the slightly better one among them.

Ok, so let us try to break down piece by piece.

Who's the faster one? Of course, speed would be on Aguilar's side. He is much faster than Greg when running the floor to the other end.

It would be somewhat hilarious seeing Greg Slaughter running like flash to dunk the ball in transition. It does not fit his body composition.

Japeth has more athleticism as compared to Greg.

Aguilar also has the advantage over Greg in terms of skying high. He's not called the 'Jumping Japeth' for no reason.

It is a great skill to possess especially when you already have the size advantage. You would easily dominate the fight against huge guys because you can literally reach a higher sky than them. Not all men can jump too high especially those who are extra big but Aguilar is exceptional that he possessed both every inside player's advantage over others.

They are both huge. Greg may be slightly bigger but let's say the 3-inch difference is negligible, who uses their size advantage better? I'd go for Slaughter. Why? Because he sticks to the shaded area and seldom goes out as compared to Aguilar who's always scattered on the floor. Gregzilla's more focused on under the rim. In fact, he's the perfect match against Fajardo. Greg Zilla can also play post ups better than Japeth who prefers perimeter jumpers than one on one post up attacks.

Despite the other going slightly higher than the other on some aspects no doubt that these two perfectly complement each other's flaws. They did not become the twin towers all by themselves but because they have each other.

Every single season, both of them are getting better. Who knows? Maybe someday Japeth's threes would be as accurate as the point guards. Maybe Slaughter could finish fast breaks and jump higher. Maybe these two could dominate the league for long years and take away this era for the whole Never Say Die community.
Labels: Basketball Brgy Ginebra San Miguel Greg Slaughter Japeth Aguilar Jasper PBA