Bouncy Thoughts: Would Irving Go Back to Cavs if Celtics Won't get Title? 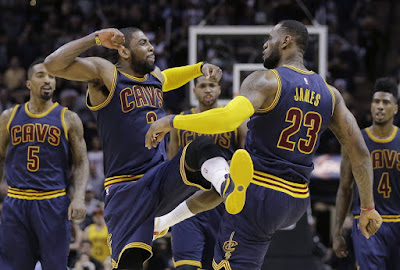 LeBron's former partner is now creating his own name with the Boston Celtics. But is what he's doing already enough to win a title for Boston this season?

If not, he'll probably go back to Cleveland and join the all star roster of this super team. But before that, let us try to criticize Boston Celtic's performance and the hopes of the team getting a title given that it's just Kyrie's debut season onto the team.

Yes it's just Kyrie's debut, but look how explosive he is already given that he only played for a short while with his new team. He frequently topped the scoring for Boston and runs the offense well. Kyrie's the old Kyrie we know way back when he played for the Cavs. An almost unstoppable offensive weaponry.

But does Kyrie perform well because of the team he's in or it's just the natural him regardless of whom he's playing for.

It may be quite impossible to put a recently formed team in its harmony so maybe Kyrie's playing well but the overall team performance and chemistry hasn't ignite yet. Nevertheless, with these form, Celtics managed to rock the whole league and blazed their path up to the eastern top and is holding its position up there well.

We could not know Celtics future clearly yet 'til the playoffs commence. Only then would the real war go on.

Now assuming that Kyrie and the Celtics fail to become this season's champs nor the Cavs. Let's say the Dubs became the back to back champs. Would Kyrie go back to the Cleveland?

Maybe the coaching staff would think that it would be Kyrie who'll complete Cavs lost chemistry. They are packed with skilled players, maybe Kyrie would be the one to find the right mix of Rose, LeBron and Wade. But his return would not be free. Chances are also high that either one between Crowder and I.T would go back to Boston. Kyrie would want to join Cavs for an even stronger revenge against rival Dubs so he'll probably go back from the team where he originated and try one more time with the all out Cavs to take out the phenomenal Dubs.
Labels: Basketball Boston Celtics Cleveland Cavaliers Jasper Kyrie Irving Lebron James NBA