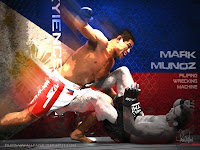 UFC on Versus this Saturday features an interesting middleweight matchup between Mark Munoz and Yushin Okami. Munoz is a Filipino-American who has an NCAA Division I wrestling championship. Okami is a heavily experienced Japanese fighter and is considered an elite middleweight who belongs to the top ten of the weight division. One thing they have in common is that both fighters are Asians, or at least have Asian roots.

Ortiz, Mark Coleman, Don Frye and other wrestling based fighters in mixed martial arts. Okami on the other hand is known to be a less than exciting grappler who can keep control of the ground fighting aspect of the game.

Okami has more experience and has fought more elite fighters, making him a 2-1 favorite. His weak spot is fighting strong wrestlers as demonstrated in his loss to Chael Shonnen back in October. This is one reason why Munoz feels that Okami may keep the fight standing to avoid being trapped in a ground and pound situation.

To counter Okami’s possible game plan, Munoz has been training with UFC
middleweight champion Anderson Silva to improve on his standup or striking game. In return, Munoz trains Silva in preparation for his title fight against Chael Shonnen in UFC 117 on August 7.


Although Okami is installed a favorite to win their match, Munoz may just come up with a surprise win. Munoz is on a three-win streak since that devastating knockout loss to Matt Hamill from a brutal head kick. There have been improvements in Munoz’ game as seen in a recent come-from-behind win over Kendall Grove.

It would be an upset for Munoz to beat Okami but there is a possibility with Spider Silva helping him improve on his striking.

Increase traffic to your site now!