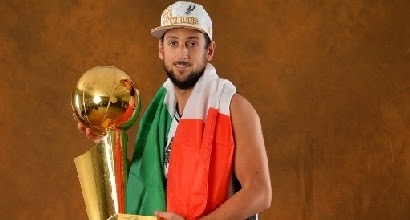 Marco Belinelli will never forget June 15, 2014,why? It was the day when the San Antonio Spurs beat the defending champion Miami Heat to be the 2014 NBA Champion, who could forget that?  Now Belinelli will always remember that day as he got it tattooed on his arm.

Not a fan of the Tattoo design though, it looks plain and boring.