The first 3 boxers are under MP-Highland Boxing Promotion. They are Rex Wao, Ernie Sanchez and former world champion Merlito Sabillo. They are all challengers for the OPBF titles while Ardin Diale who promoted by United Promotion will defend his OPBF flyweight title for the second time this time in Japan and his stable mate Rene Dacquel will also defend his OPBF Super flyweight title. 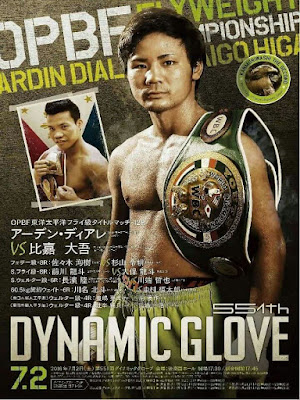 
The first Filipino who will fight next month is the experienced boxer Ardin Diale (31-9-3,15). He will defend his OPBF flyweight title against KO artist Daigo Higa (9-0,9). Diale won the title last December 2 2015 against compatriot Renoel Pael and defended it once against another Filipino Jonathan Francisco both via Unanimous decision. His foe is the fast rising Japanese prospect who scored victory in Thailand and S.Korea, Higa will step up in class facing a world title challenger and very tough Filipino.

his team mate Ernie "The Rock" Sanchez (15-7-1,6) will challenge the defending Super featherweight champion Masayuki Ito (18-1-1,8)  the fight was scheduled  last April but the fight was cancel due to Ito's rib injury. Now Ito recovered and bout with Sanchez is on having the new fight date.

The third boxer from MP-Highland promotions is Merlito "Tiger" Sabillo who will fight for OPBF minimumweight title against a not yet determined opponent, venue and fight date but there is a big possibility that he will challenge the champion Chao Zhong Xiong of China or fight for the vacant title if Xioang vacated the title. 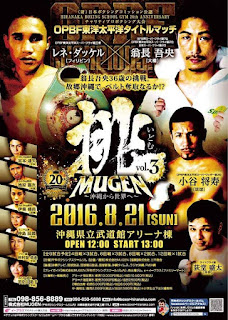