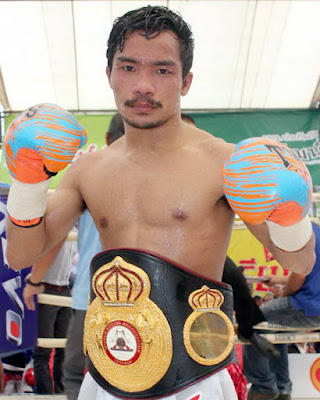 Thailand's Knockout CP Freshmart  become the only WBA minimumweight world champ after 12 round Unanimous decison win over defending champ Byron Rojas of Nicaragua. 115-113 on all scorecards.The fight was held at City Hall's Ground, Khon Kaen, Thailand.In a rough and tumble battle featuring numerous clinches from both men and some headbutts from Rojas, the defending champ started out aggresively as he attacked the Thai who fought back hard especially to the body. In the second half, Knockout pulled ahead with quick one two combinations. The defending champ tried to close strong sensing he was behind but Knockout cruised and stayed out of trouble to seal his victory. Good hard fought victory for the Thai who suffered a cut over his left eye from a headclash in the 2nd but was able to withstand that and the defending champ's spirited effort to give Thailand its third world champ and second at minimumweigh the other one is WBC champion Wanheng Menayothin.


In co main event another Thailander Palangpol CP Freshmart retained his PABA light flyweight title with a near shutout UD12 over Filipino Vincent Bautista. 120-108 twice and 119-109.