4 more sleep till UFC 200! The card that MMA world is impatiently waiting for. It easily becomes the Fight Card of All Time for me.

Jon 'Bones' Jones made his UFC comeback last April at UFC 197. The drug and road incident removed the world no. 1 from UFC rankings. Daniel Cormier disappointed the fans by pulling out of the fight last minute. Ovince St Preux stepped up instead. The fight was not as exciting as his last fights but still he was announced as that LHW Interim Champion of the world. Before April ends, UFC gave JBJ vs DC as the main event for UFC 200.

Miesha 'Cupcake' Tate shocked the world when she choked Holly 'The Preacher's Daughter' Holm out. The Woman's Bantamweight title finally was wrapped around her waist by Dana White last March. She defeated the one who put 1 in Ronda Rousey's loss record whom she never won 2 fights with. Here at UFC 200, she will defend her belt against Amanda Nunes.

Mark Hunt's walkoff KO on Frank Mir, Jose Aldo was put to sleep by Conor McGregor, Frankie Edgar beating Chad Mendes, Cain Velasquez long overdue return to the octagon after Fabricio Werdum beat him, Johny Hendricks' lost to Stephen Thompson which moved the Wonder Boy up the #2. TJ Dillashaw lost his Bantamweight belt over Dominick Cruz. All these ultimate scenes I managed to watch just like my favorite TV series every night. On Sunday, July 10, 2016 at 10:00AM another episode of their fighting careers are coming out.

Who you pick, people? Let us know your UFC 200 predictions. 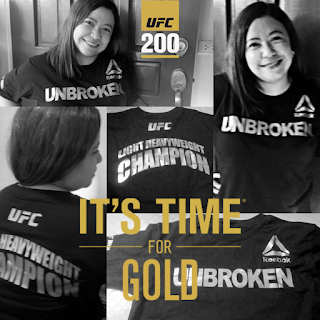 This is our time to show our support. I am Team Bones all the way!