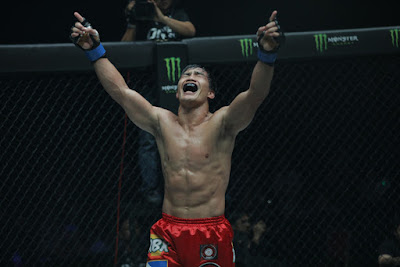 Five superb athletes from Baguio City’s famed Team Lakay are set to make the familiar trek from the mountains of the Cordilleras down to the glitzy, urban jungle of Manila. Geje Eustaquio, Honorio Banario, Edward Kelly, Danny Kingad and April Osenio are all set to see action on the main card of ONE: AGE OF DOMINATION, which takes place at the Mall of Asia Arena on Friday, 2 December.

While the fighters are all highly-motivated and focused on winning their upcoming bouts, inspiration it seems can come not just from personal success but also from the success of a teammate.

Two weeks ago, senior Team Lakay fighter Eduard Folayang made ONE Championship history by becoming the first man to defeat Japanese MMA legend Shinya “Tobikan Judan” Aoki since the Brazilian jiu-jitsu ace signed on to the promotion in 2012. The victory earned Folayang the ONE Lightweight World Championship. It was Aoki’s first loss in four years.

“It was such a joy to watch my friend and brother win the title. I am happy for him. It is an amazing feeling because I know I was able to help him achieve his goals,” said Honorio Banario. “We always try to help each other in training, and we have improved a lot together.”

Folayang stepped inside the ONE Championship cage with Aoki a little close to midnight, November 11, miles away from home where his teammates watched from different places. Some were at the Team Lakay gym, celebrating in a frenzied environment while others were in their homes.

One thing was common however,  no matter where they were, none of them were in left their seats when referee Yuji Shimada waved the bout off a minute into round three.

“I was watching the fight online. The moment that we observed Aoki’s spirit was subdued, we screamed at the referee to stop the fight. Then when he stopped the fight, it was all crazy from there,” said bantamweight contender Geje Eustaquio.

“Everybody was jumping. It was so hard to contain our happiness at that time. We all went to bed past two in the morning, celebrating. We just couldn’t contain ourselves. We know Eduard deserves that title. He has been in ONE Championship since the beginning until now. He really deserves that belt. It’s the best feeling in the world, when you reap what you sow. Now is the time for him. It’s harvest period.”

“Aoki’s game plan just didn’t work out. Eduard really deserved the win, he has been preparing for this moment his entire career. When he had Aoki cornered against the fence, every punch Eduard landed with that right drew cheers from everyone watching. It was awesome,” said Kelly.

“In the first round, When Shinya [Aoki] took Eduard’s back, I was scared for him. That wasn’t a good position to be in. So when coach Eduard was able to get out of that, to defend against that, and escape, that’s when a great feeling came over me,” said Kingad. “ I knew then that Eduard can handle Aoki’s grappling. I can’t describe the feeling that I felt when he won. I was so happy. Nobody watching with me was sitting down. Everyone was going wild.”

Osenio said the win even inspired her to train harder the next day.

“The next day, I felt so inspired. I trained three times the next day. I had so much energy,” she said.

After the victory, Folayang spent a few days in Singapore with his wife and family, taking in the sights and adjusting to his new life as champion. He then boarded a flight to Los Angeles where he spent a week with fellow ONE Championship athletes Martin Nguyen and Peter Davis in a promotional event.

The reception Folayang received overseas from Filipinos and even from the local MMA fans in Los Angeles, Folayang says, was absolutely astounding.

“It hasn't sunk in yet that I am a world champion. It's overwhelming. A lot of people have seen the fight. They didn't expect that I would win. It's really a life-changing experience. Now there's a lot of people interested in me. It's fun,” said Folayang.

“It's really a great feeling. I haven't had a good night's sleep since I won the title. It's been a life-changing experience. I give thanks to everyone for their support.”

Folayang will be in attendance next Friday at MOA Arena for “Age of Domination”, where it will be his turn to give support to his teammates. As Team Lakay surges forward into becoming one of the premiere MMA camps in Asia, Folayang’s presence will continue do well to serve as a motivational boost to the fighters competing inside the cage.