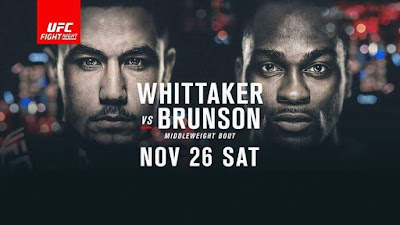 UFC Fight Night 101: Whittaker vs. Brunson will be held on November 27, 2016 at Rod Laver Arena in Melbourne, Australia.

UFC Fight Night Melbourne is headlined by the five round light middleweight fight between Robert Whittaker and Derek Brunson, and the lightweight clash between Jake Matthews and Andrew Holbrook.

This is the third event where the matches and fighters were rescheduled and rebooked which was originally from the cancelled UFC Fight Night 97: Lamas vs. Penn in Manila. A flyweight bout between Yao Zhikui and our very own Jenel Lausa was moved for this event. Also, Seo Hee Ham vs. Danielle Taylor at women's strawweight. Yusuke Kasuya, Alex Volkanovski and Jon Tuck were booked for this event but their original opponents were replaced.

Here's the official fight card and result of weigh in:

*Zhikui made weight on a second attempt after initially weighing-in at 127 lbs.