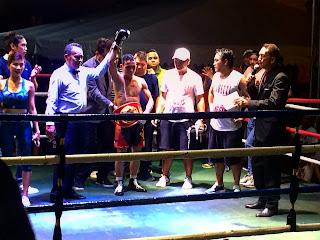 Both boxers have slow start in the first two rounds of the fight sensing each other's power until Onggocan landed a loaded left hook to the head of Pantilgan followed by barrage of body shots and was looking to stop the fight early but the bell rang that save Pantilgan from stoppage loss in the third. Pantilgan recovered well and started to trade leathers with the champion in the next few rounds.

Pantilgan had his moments in sixth round where he hurts Onggocan with body shot and few shots to the head. The bigger Pantilgan build up his confidence and continued to throw loaded punches while Onggocan countered him with double straight left and body punches that seems more effective. After ninth round Pantilgan returned to his corner shaking his head and decided to stop the fight before the start of the tenth and final round. Onggocan landed a lot of body punches that force Pantilgan to quit.

Onggocan improves his record to 9 wins (5KO) with 1 defeat while Pantilgan dropped to 14W (11KO) with 5 defeats.

Mark Rey Taday (8-2,4) won a unanimous decision over Vincent Bautista (5-8-2,1). Bautista was rushed to the hospital few minutes later but now in good condition according to his friends.