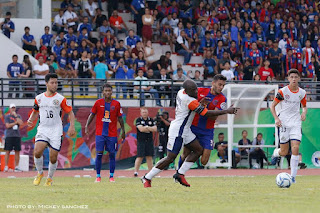 Celebrities and sports personalities such as Asec. Mocha Uson, the Mocha Girls, the Malditas Philippine Women’s National Football Team were all seen in the crowd wearing Davao Aguilas shirts.

Malditas players Cam Rodriguez and Nona Amoncio both said in a Fox Sports Asia interview, “We’re both here, along with the team to support Davao Aguilas FC.”

Its next match will be on June 28, at 4 p.m. against Global Cebu FC.  The match will be held also at Davao del Norte Sports Complex.

Tickets are available at the stadium.  For more information, please visit www.facebook.com/DAFCofficial.