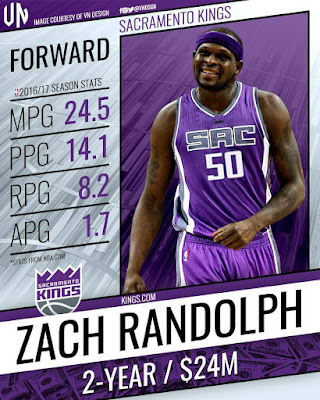 There is no question that Zach Randolph was one of the players that gave Grizzlies the identity of being a grit and grind team. His rough and inside game became a signature and the Grizzlies became a consistent playoffs team in the NBA.  The Grizzlies made it to the playoffs 7 out of 8 seasons Zach played for them.

Now at 35, the Grizzlies management is looking to change its direction and did not offer the star forward a contract, hence Randolph ended up in Sacramento.

From the outside it looks like everything was mutual but according to a few reliable articles, Randolph was hurt because the Grizzlies did not even attempt to offer anything.

Randolph averaged 14 points and 8 rebounds from 24 minutes of play. A good stat line if you ask me. The Kings thinks that Zach can still be a productive player and offered him $24 million for 2 years. Sacramento traded away their star power forward Cousins last season and Zach is looking to fill that spot this year.

The Grizzlies already shipped Vince Carter out and I won't be surprised if Tony Allen would also go.