Highlights: It's a Slaughter House as Ginebra Ravaged Kia to Four Straight Losses, 120 -99

Kia Picanto was ravaged by Barangay Ginebra, suffered worst defeat this conference with a score of 120- 99. 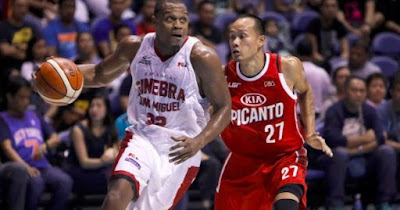 21 points, that's how wide the difference of the scoring is after four quarters of play between struggling Kia Picanto against Barangay Ginebra. Yet another disappointing loss for Manny Pacquiao's team as they could not find the answer to stop Ginebra and practically all the teams they met so far.

Ginebra started the game on fire securing a 15 point advantage in the first quarter and it went on until the rest of the game. This was a gimme game to start with.  Ginebra now enjoys two wins in a row while Kia is at the bottom of the standing with 0 wins and 4 losses.

Ginebra was shooting 49% while Kia is at 42%.  Everything was working for Ginebra even Mark Caguioa who rarely produced piled up 16 points on 8/9 shooting.

Slaughter also had a big impact in the game scoring 18 points and while Brownlee is his usual self at 26 points.

Kia's import Cummings was a disappointment tonight scoring 16 points on a (30%) 6/20 shooting.

Coach Tim Cone spoke at the end of the game and was all praises for his players and was sharing how they were able to display all their weapons and talked about focus and triangle offense.

"Solid all around game"  - Tim Cone