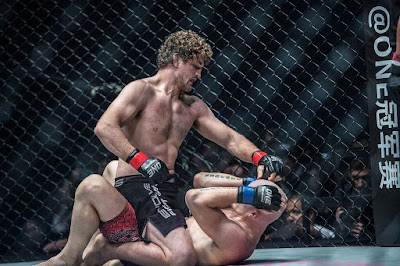 The largest sports media property in Asian history, ONE Championship™ (ONE), sent shockwaves throughout the crowd at the 15,000-seater Shanghai Oriental Sports Center in Shanghai, China with an exciting evening of world-class martial arts action. ONE CHAMPIONSHIP: SHANGHAI showcased a series of compelling bouts, punctuated by a thrilling headliner that left fans on the edge of their seats. In the main event, Ben “Funky” Askren of the United States retained the ONE Welterweight World Championship, defeating Zebaztian "The Bandit" Kadestam of Sweden.


In the main event of ONE CHAMPIONSHIP: SHANGHAI, reigning ONE Welterweight World Champion and one of the best martial artists in the world pound-for-pound, Ben “Funky” Askren of the United States easily took care of Zebaztian "The Bandit" Kadestam of Sweden, taking his younger foe down to the mat at will with his world-class wrestling and finishing him with a volley of punches. On the mat, the former US Olympian effortlessly secured a mount position and relentlessly pounded on the Swedish striker to compel veteran referee Yuji Shimada to halt the action in the second round.
Ben Askren, ONE Welterweight World Champion, stated: “I really had a wonderful time in Shanghai. Thanks for having me. It’s an honor to be here. To everyone who is watching from all around the world, thank you guys so much, it means the world to me.”
Askren added: “I am ready for anyone in the world who wants to step up to the plate and challenge me for my title.”
In the co-main event of the evening, Chinese flyweight prospect Ma Hao Bin returned to the ONE Championship cage against compatriot Hexigetu, and his performance certainly did not disappoint. Known by the moniker “The Southern Eagle,” Ma once again proved his mettle on the ground with another technical grappling showcase, converting several takedown attempts, ultimately winning by guillotine choke with ten seconds remaining in the second round.
Singaporean prospect Amir Khan continued his winning roll inside the ONE Championship cage by stopping Jaroslav Jartim of Czech Republic. Khan wasted no time in bringing the action to the mat with a successful takedown. Once on the ground, Khan rained down heavy blows to punish Jartim. Although Jartim found a way to return to his feet, Khan easily secured the finish in the stand-up trade with a left high kick and strong right cross. Jartim succumbed shortly after as the referee deemed him unable to continue. The technical knockout conquest earned Khan his fifth straight victory.

In one of the most exciting matchups of the evening, Xu Chun Yan of China and Eh Ya Nut of Cambodia put on a spectacular showcase of aggression to the roar of a packed crowd as the two competitors engaged in a skirmish in the opening moments of the strawweight contest. Although she is known for her boxing background, Xu flaunted her solid ground game to pacify her Cambodian opponent’s firepower in the stand-up trade, wearing down Eh Ya Nut and steering her to a decisive victory by way of unanimous decision.
Japanese veteran Tetsuya Yamada claimed his first win under the ONE Championship umbrella, submitting China-based American Kyle Rozewski. The finish came swiftly when Yamada effortlessly took Rozewski down to the canvas and fastened a rear-naked choke to earn the victory in the first round.
Sagetdao Petpayathai of Thailand was successful in his second outing as a ONE Championship athlete, defeating Mahmoud Mohamed of Egypt. The Lumpinee Stadium Muay Thai legend lit up Mohamed with his powerful striking, tagging the Egyptian with lightning quick elbows and thudding punch combinations. Petpayathai opened up his hands and drove Mohamed to the mat where he unleashed the bout-ending sequence to clinch the victory by technical knockout in the first round.
“Supermom” Miao Jie of China made a triumphant promotional debut in ONE Championship by submitting Mona Samir of Egypt. Miao got the job done by forcing Samir to tap with an armbar submission in just 49 seconds of the very first round.
In a battle of Chinese lightweight standouts, Zhang Ze Hao came out on top of Li Cheng Chao. Having a solid game plan to topple Li, Zhang delivered a sensational performance, forcing his opponent to succumb to strikes in the third round.
Xie Chao of China and Marc Marcellinus of Malaysia kicked off ONE CHAMPIONSHIP: SHANGHAI in exciting fashion. Both men wasted no time in going to battle at the center of the cage. With the two stalwarts spent after just a few minutes of action, it was Xie who came away with the win via submission in the first round.

Official results for ONE CHAMPIONSHIP: SHANGHAI

In case you missed the action log on to www.onefc.com/livestream for the full replay of the fights at only US $9.99.