By the Numbers: Ginebra's Tinyente Producing Useful Numbers Despite Being Injured 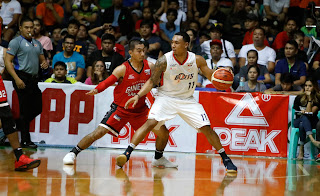 LA Tenorio has been playing through pain during the entire Governors' Cup. (Photo by the PBA Media Bureau)

Like him or hate him, Lewis Alfred Tenorio deserves a drop of your praise, regardless of which team you are rooting for. Why? In case you are not familiar, if Tenorio looks healthy to you because he has been vital to the success that the defending champions who are 2 wins away from another Governors' Cup championship, think again. The truth is, Tenorio has been playing all conference long with a problematic elbow which has occasionally hurt his performance but not his desire to play, never his heart to win. In fact, Tinyente had the choice to undergo a surgery but decided to wait until the end of the current conference- a decision he made during the 3-week break back in August.

There's no doubt in every Ginebra fan that it was LA Tenorio's 3-point basket with 67 seconds left in Game 2 that took the life out of the Meralco Bolts as part of the Gin Kings' 17-1 fourth-quarter run. 5 of those 17 points in the dying minutes of the game came from the hurting Tenorio who even joked he prayed for a divine intervention when he took that long-distance shot with barely 2 seconds left on the shot clock. Swish! Fortunately for Tenorio, fortunately for Ginebra, the basketball gods answered their prayers and lett the shot hit its target.

Now, in case you need a reminder of how Tenorio performed during the first two games of the best-of-7 series, below are the numbers:

Despite his elbow problem, Tenorio has been able to score in double-digits in both games, averaging 12 points per game while making 35% of his attempts including 40% from deep. From a personal perspective, this basketball pundit on wheels thinks that 35% shooting of Tenorio is acceptable than the 3-point shooting percentage of the entire Meralco Bolts because, at the very least, Tenorio is making the most out of his attempts while the Bolts are engaged in a brick shooting spree.

LA Tenorio is first and foremost, one of the best floor generals and playmakers that the league has ever seen in its entire existence. Playing in the Finals is no longer new to him and despite his injury, he dished out 5 dimes in the series opener en route to a dominant win by the Gin Kings.

That number diminished to a single assist in Game 2 and part of that was the fact that the rest of the team were either well-defended or having an off-night. But that 1 assist that he had last Sunday doesn't take anything from Tenorio at all because we all know that he can create scoring opportunities for his teammates. It's now up to his teammates to finish the plays off those nice passes from Tinyente.

Playing through pain, leading his team to victory, these are the things that Ginebra should appreciate of LA Tenorio. If anything, he continues to personify the "Never Say Die" mantra that the Gin Kings have been loved and hated for. Tenorio even joked that he might have missed the last 3-pointer in Game 2 had he was healthy.

At the end of the day, Tenorio will be a vital piece to Ginebra's offense because he is Tim Cone's extension on the court that's why the Gin Kings should be thankful that the former decided to wait until the end of the season before dealing with his injury.

Regardless if healthy or not, Lewis Alfred Tenorio is one guy you should take seriously. In a game of basketball, size doesn't matter. Heart does.