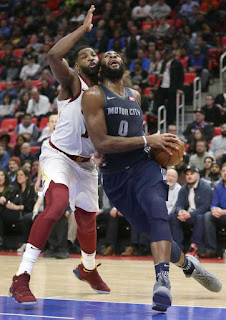 The Detroit Pistons are still recovering from the blockbuster trade that sent Avery Badley, Tobias Harris, Boban Marjanovic and two picks to the Los Angeles Clippers in exchange for star forward, Blake Griffin and two more players. While the Pistons will have to wait until their new acquisitions are cleared to play, losing Harris and Bradley was a big blow for Detroit.

Somehow, it doesn't matter as long as Ande Drummond is around and producing big numbers.

Just a few hours after Andre Drummond was selected as John Wall's replacement in the All-Star Game, Drummond led the Detroit Pistons to a 125-114 victory over the Cleveland Cavaliers who just lost forward, Kevin Love after the player sustained a possible season-ending hand injury. The win enabled the Pistons to get out of their 8-game losing slide while the Cavs continued with their miseries as they have dropped 7 of their previous 10 games and have put them just half a game ahead of the Miami Heat in the Eastern Conference with the Cavs meeting the Heat next.

So how did the Pistons beat the Cavs for the first time in 3 games this season? Below are the numbers:

Another 20-20 Performance for Drummond

The best way to celebrate your All-Star Game selection is by playing a great game and that's exactly what Andre Drummond did against the Cavs. He scored 21 points and grabbed 2 rebounds. He shot 9 for 12 in the field but went 3 for 7 from the free throw line. He dished out 7 assists, added 3 steals and 3 blocks in another all-around effort.

Great D on LeBron and company

To begin with, the defense was one of the reasons why the Pistons won over the Cavs this time around as they limited Cleveland to only 45% field goal shooting including a horrible 37% shooting from downtown. LeBron James, for one, went 9 for 20 from the field for his 21 points. He shot 2 for 7 from three and had 4 turnovers. Isaiah Thomas was worse, going 3 for 10 from the field while making only 1 of his 4 attempts from outside. The only reason why Thomas was able to score 19 points was his 12 for 13 shooting from the free throw line.

68 Points in the Paint

If you want to see how horrible the Cavs are nowadays especially on the defensive end, just take a look at their game against the Pistons. The Cavs allowed the Pistons to eat them alive on the inside as Detroit dominated the paint, scoring 68 points in that area.

If the Pistons beat the Cavs without Blake Griffin, imagine the damage that could have been inflicted if Griffin was around and dunking all over the place. Catastrophic!

If anything, this is a good sign that the Pistons have found a way to win despite being shorthanded. They've lost 3 role players for Griffin.

Will the Pistons continue to win once Griffin and company suit up? Possibly. As long as they stay healthy, they might even cause an upset once the playoffs kick off. For now, they need to focus on one thing: make the playoffs.
Labels: Andre Drummond Basketball Blake Griffin Cleveland Cavaliers Detroit Pistons Iggy Isaiah Thomas Kevin Love Lebron James NBA