Bouncy Thoughts: Who Can be Considered as a PBA Superteam? 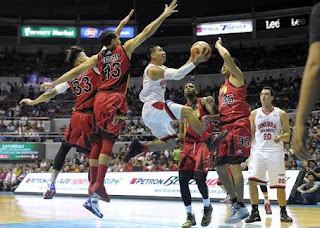 I am sure you are thinking about two huge teams. The Brgy. Ginebra San Miguel and the San Miguel Beermen. Yes, they are two great teams who won championships and have placed their team name in the hall of fame. But who can be considered as a Super Team?

But before that, how can we say that a team is, in fact, a super team?

When we speak of a super team, think of the Cleveland Cavaliers and Golden State Warriors as well as the Oklahoma City Thunder. They have something in common, a line up full of superstars. So, who's who between SMB and Ginebra?

Well, in my humble opinion it is the San Miguel Beermen who has more remarkable players than Ginebra. Ginebra has Scottie, Japeth and Slaughter while SMB has the Kraken June Mar Fajardo, the rookie Christian Standhardinger, clutch shooters like Chris Ross, the Spiderman Arwind Santos and Super Marcio Lassiter.

SMB is more packed with high caliber players as compared to Ginebra.

But it does not necessarily mean that SMB is a better team than Gin Kings. Remember that despite the threatening line up of today's Cavs, they fail to become as dominating as expected. Maybe sometimes too many extra skilled players could not find the right mix well. They may be skilled individually but a solid team play would always beat single and scattered talent.

Being a superteam may not guarantee you championships but of course, the advantage is just obvious. It just depends on the coaching staff on how they would utilize the overflowing talents within their line up.

Aside from SMB, there are other teams who once became super teams in the league like the TNT Katropa during Jimmy Alapag's reign when he played with Jayson Castro as well as Ranidel De Ocampo. We also have the San Mig Coffee Mixers (now Purefoods) where there was James Yap, Marc Pingris, PJ Simon and Mark Barroca.

There are also other teams which may lack that superstar charisma but has played well. One good example is the Meralco Bolts, they may not have that extra fame which teams like Ginebra possess but they sure are doing well as they reached the finals twice. There may be no superstars but they are definitely, all role players.
Labels: Basketball Brgy Ginebra San Miguel Jasper Meralco Bolts PBA San Miguel Beermen TNT Katropa