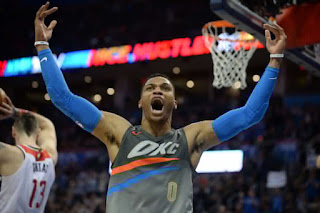 
Another night, another show for Russell Westbrook.

Westbrook scored 46 points and prevented a comeback from the Washington Wizards in a blazing fourth quarter that went haywire until the Oklahoma City Thunder narrowly escaped the onslaught en route to a 121-112 victory as they now have won 6 straight games.

Despite low-scoring shows from Carmelo Anthony and Paul George, Westbrook willed the Thunder to win with his on-court brilliance and another hot performance, shooting 65% from the field. Westbrook tallied 46 points, 6 rebounds, and 6 assists at the final buzzer.

The Wizards rode on Bradley Beal’s 41 points, which included 6 threes along with 12 rebounds and 7 assists to battle the Thunder before they ran out of gas within the final minutes of the game. The Wizards never had a lead in the game.

The Thunder rolled the opening tip with quick plays, starting off with a dunk by Steven Adams. Adams fueled the Thunder’s 10-0 opening run with a nasty move that is too good for a center; he was cutting left off a Westbrook pass and then shooting with his right hand for a backdoor layup.

It took a while before the Wizards were able to respond and kept battling through the quarter with a defense that smothered Oklahoma City’s offense, including a chase down block by John Wall on a Paul George layup. The quarter ended with the Wizards able to catch up to the Thunder, trailing 25-20.

The Thunder erupted in the second quarter with a 17-5 run for the first 6 minutes, which included a smooth finger roll layup from Westbrook that stretched the Wizards’ defense pretty thin. Bradley Beal made some good plays that kept the Wizards alive in the game, dishing and scoring from all sides of the floor.

Beal drove but then stepped back for a long two-pointer within the last seconds of the quarter as the first half came to a close with the Wizards trailing the Thunder by 14, 54-40.

The game escalated into a war as it went back and forth, but this time John Wall and the Wizards were running the floor. The Wizards sparked a 17-7 run to cut the Thunder lead to just 4 with 7:14 in the third. Beal tied the game at 68 with a technical free throw after an altercation ruling between him and Steven Adams.

The Thunder responded with their own war and later pushed the lead back to double digits on a wide open three by Raymond Felton. The epic third quarter ended on a missed three by Bradley Beal as the Thunder clings to an 82-74 lead. 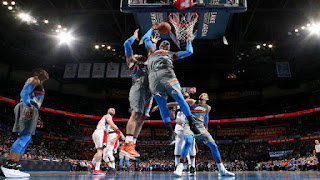 The final quarter was set ablaze as both teams combined to score 77 points. Basket after basket, as Bradley Beal dropped 18 of his 41 points to keep the Wizards in tow in the game. Westbrook crossed up Mark Morris, and swung right and went up for a right-handed dunk that fired up the crowd as the Thunder go up for a 92-85 lead.

Within the final seconds, both teams shot baskets but the Wizards were never able to chip out the Thunder lead. Westbrook pulled up a three for a dagger that sunk the Wizards to close the game.  The Thunder once again outwits the Wizards for the 9th straight time at home and now have their 6th straight victory, 121-112.