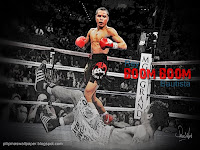 CEBU CITY – Rey 'Boom Boom' Bautista and Alejandro Barrera of Mexico engaged in a give and take battle in the entire four rounds.

The bout was as good as it lasted but a cut on Barrera's left eyelid at 1:14 of the 4th round gave the technical win to Bautista after the cut was ruled by the referee as coming from a legitimate punch at the Waterfront Hotel & Casino here tonight.

The full-packed Pacific Ballroom spectators were on the edge of their seats as Barrera was tagged by powerful lefts and rights by Bautista and Barrera had also his moments countering with a right on Bautista's missed lefts.

The sudden ending however sent the crowd unsatisfied going home and boos were heard when the verdict was announced as others thought that the cut on Barrera was caused by a headbutt.

After the fight, Bautista apologized to the crowd for him not being able to knock out his Mexican opponent.

The popular Boholano bomber is now slated to fight in Dubai on October 29.
Continue...