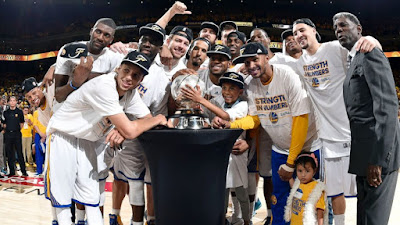 I will do my best to segment this and give you highlights as well.

Kerr also became the first rookie coach to win an NBA Championship since Pat Riley, a record that was made since 1982 with LA Lakers. -The year I was born :) -

Steph Curry - A feat that should not be overlooked, His team beat all other first NBA team through out the playoffs. Warriors beat Pelicans (with Anthony Davis) , then defeated The Grizzlies (Marc Gasol), then went on to beat Houston  (With James Harden), and defeated the best player LBJ. Curry led his team this finals with 26  PPG 5.2 RBG and 6.2 APG . If you are not impressed then let me add this fact, Curry is the 3rd PG to win an MVP and NBA title the same year, previous two were Bob Cousy and Magic Johnson.

Curry also set a record for most 3 point conversion in the post season with 98 3-pointers.
(Previous record Reggie miller with 58)

Shout out to #Free Dawkins for the Videos.

That's about it . I will be writing more articles about this 2015 NBA Finals.