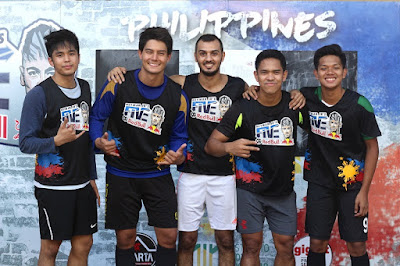 On Saturday, February 25th 2017, Neymar Jr’s Five returned to Sparta Philippines for another round of exciting matches. Over a dozen teams squared off with just four making it to next week’s finals: Manila Tala, Strafford FC, Baggie FC, and Naxional.

Neymar Jr’s Five is the Brazilian forward’s signature football tournament which pits five-a-side teams in head-to-head in 10-minute matches with a twist. Every time one team scores, the opposition loses a player. It’s fast, technical, and tactical.

On hand for the festivities was Daniel Matsunaga, who represented popular Brazilian-bistro, Naxional South American Diner, as Team Captain.  “It’s football, I have loved it since I was a kid and I always find time to play. It’s exciting to have these kinds of tournament in the Philippines.”

Also on hand, was former team captain of the Azkals, Chieffey Caligdong. “It’s challenging and I really enjoyed the game. It was my first time playing street soccer.”

The Finals will happen this coming Saturday, March 4th at SPARTA Philippines, in Mandaluyong. It’s going to be another action-packed afternoon to witness who will be playing on Neymar Jr’s home turf.

Dare to dream, and outplay them all!