Kevin Durant Could have Played in Washington But... 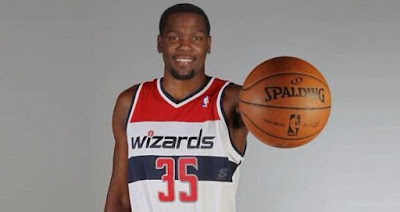 This is one of those situations when you will wonder What If. Kevin Durant was born and raised by his mother in Washington DC. He practically grew up and learned how to play basketball there.

He played college ball in Texas and have become a recipient of numbers of awards including a Naismith College Basketball Player of the Year. Everything was just going Durant's way.  In 2007, Kevin joined the NBA and was drafted by the Seattle SuperSonics who later migrated to Oklahoma and became the Thunders. Everything was going smooth and people so loved him there... until in 2016 he decided to look around for options for his free agency.

Washington was one on the table and there were plenty of reasons why he could join the Wizards. The team has great potential that includes two of the best backcourts in the NBA today who can surely compliment his game but he chose to play for the Warriors. He just didn't want to go back home.

I don't want to open up anything in the past, but I really just didn't want to play at home. It was nothing about the fans. Being at home, I was so happy with that part of my life — playing at home, being in front of friends, hanging with friends and family every day. That was a part of my life that has come and gone. - Kevin Durant on Tim Bontemps and Adam Kilgore of the Washington Post