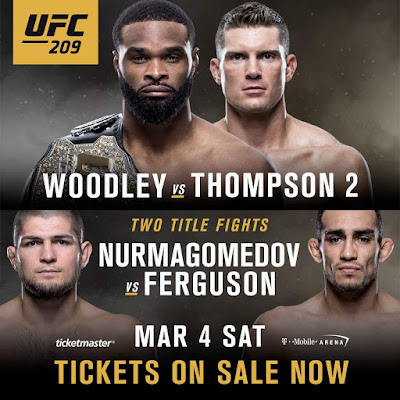 Welterweight champion Tyron Woodley and challenger Stephen Thompson rematch for the title at UFC 209 at T-Mobile Arena in Las Vegas on Mar. 4. Woodley and Thompson fought to a draw when they met at UFC 205 for the belt. UFC 209 airs live on Dj Pay-Per-View from T-Mobile Arena.

An interim UFC Lightweight Championship bout between undefeated Khabib Nurmagomedov and The Ultimate Fighter: Team Lesnar vs. Team dos Santos welterweight winner Tony Ferguson as the co-main event. The pairing was originally booked for The Ultimate Fighter: Team McGregor vs. Team Faber Finale and later UFC on Fox: Teixeira vs. Evans. However, the bout was cancelled both times due to Nurmagomedov being injured and Ferguson pulling out due to a lung issue, respectively.

Rashad Evans long much-awaited returns to face Australia's Daniel Kelly. The former light heavyweight champion, Evans has fought and defeated the best of the best at 205 pounds, but in March, he will test the waters at 185 pounds against Kelly, a four-time member of the Australian Olympic judo team who has won three in a row.

In the heavyweight division, unbeaten Daniel Spitz will step in for Todd Duffee and make his Octagon debut against England's Mark "The Hand of" Godbeer.