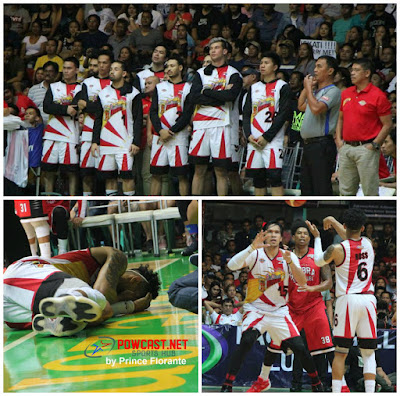 SMB expected a tough crowd coming to Lucena. They realize as well that most of the people are going to cheer for Ginebra. What they did not see coming was the surging Barangay Ginebra in the first half leaving them shocked and seemingly unprepared for the sudden offensive prowess of the Gin Kings in the first half of game 2.

The crowd who was majority Ginebra fans were celebrating early. Ginebra had a sudden collapse in the 3rd quarter allowing SMB to score 39 points while they only registered 18 points. It was a disappointing 3rd quarter for the Gins fans. On the other hand though, it was a show of resilience by the San Miguel Beermen.

They are not the top seed and the defending champ for nothing. Tim Cone acknowledged that SMB in not likely to stop until the buzzer. Even if SMB had a series of foul troubles and bad luck with Lassiter being ejected and Fajardo scoring just 10 points, their team fought till the end.

Fajardo was a non-factor as Ginebra clogged down on him on defense all game long.

On a positive note however, SMB showed that they don't cave under pressure and they have weapons even without Lassiter and Fajardo. Arwind Santos and Ronald Tubid carried SMB late in the ball game and both players almost carried the team to a win.

Ginebra did get a lucky bounce late in the 4th that sent the game to overtime and Ginebra continued in their streak to ultimately close out game 2.

Game 3 is on Wednesday night at Smart Araneta Coliseum.