Willy Wilson is Player of the Week 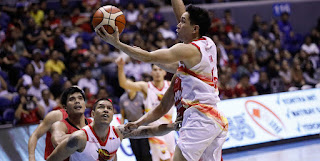 (Photo by the PBA Media Bureau)


His performance against the giants of Ginebra was noticed.

Not everyone gets the rare opportunity to be still playing in a basketball league like the PBA even at the age of 30 and above. In fact, only a few sportsmen are able to reach this specific age and still actively playing. We have Sonny Thoss of the Alaska Aces, Ronald Tubid of the Kia Picanto, Mark Caguioa of the Barangay Ginebra Gin Kings and of course, Asi Taulava, despite being at the age of 44, is still banging bodies with the league's younger big men for the NLEX Road Warriors.

Only a few players can prove that age is just a number and among those players is Willy Wilson of the Phoenix Fuel Masters. Why?

Thanks to his performance during the Fuel Masters' game against the Barangay Ginebra Gin Kings, Willy Wilson has been named as the Player of the Week for the period of January 22 to 28, 2018.

Against the formidable frontline power of Japeth and Raymond Aguilar alongside the mid-range expert, Jervy Cruz, Willy Wilson provided the veteran experience off the bench as he scored 19 points on a perfect 7 for 7 field goal shooting.

He scored 14 of those points in the 2nd and 3rd quarters which helped Phoenix ran away and eventually fended off a Ginebra comeback attempt late in the game.

He was one of the three players of Louie Alas who scored 19 points in that game which improved Phoenix's record to 3-3 in the Philippine Cup. He also had 5 rebounds, 2 dimes and  2 steals all in just 25 minutes of action. But more than numbers, the Fuel Masters have been benefiting from Wilson's experience as he has been in the league since 2004 after getting drafted in the second round by the Alaska Aces. So we can expect better things from Pheonix this conference, to say the least.

With Phoenix aiming for their 4th victory in the conference as they will face the Aces this coming Wednesday, expect the 37-year old Willy Wilson to produce quality numbers as he will try to lead his team anew. After all, he beat big names such as  LA Tenorio and June Mar Fajardo for the weekly recognition.
Labels: barangay ginebra gin kings Basketball Iggy June Mar Fajardo LA Tenorio louie alas pba philippine cup Phoenix Fuel Masters willy wilson