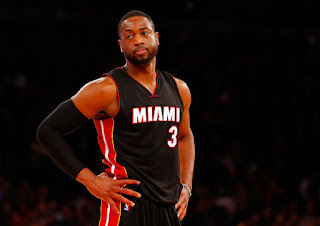 Mr Dwade, there is a time when wade county has been named dwade county for the Miami heat in Florida.
Dwade is the only superstar from the 2003 draft that has been loyal to his team, He has taken two pay cuts, first one was when they formed the super team with lebron and Chris Bosh. Wade opted out of his contract last summer to take the second pay cut that helped the franchise acquire Loul Deng.

Reports has been said that Wade if anything wants security, Wade is already 33 years old and wants to have a solid retirement plan needless to say he is still one of the best players in the league, the only concern is his health, last season he missed 20 games due to injuries.

here is a short transcript of the current negotiation

"The Heat and Dwyane Wade have been discussing potential resolutions of his contract situation and there’s a significant difference in what both parties believe he should be paid for the next three seasons, according to multiple sources
.
Though Wade prefers to stay with the Heat, where he has spent his entire 12-year career, he is now open to considering other teams this summer if the Heat does not raise its offer, according to three sources with direct knowledge. Wade must decide by late June whether to opt out of a contract that would pay him $16.1 million next season.

The Heat wants to keep him but believes that paying him what he’s seeking would dramatically reduce its flexibility to add additional players during the summers of 2016 and 2017.

Wade said last summer that he was curious to see what he could command in the summer of 2016, when the cap is expected to skyrocket from $67 million to $89 million. That led to the belief that Wade would opt-in this summer.

But according to associates, Wade wants to opt out this summer, with the hope that the Heat would give him a lucrative three-year deal that would extend past his 36th birthday.
That does not appear to be the Heat’s preference. The Heat apparently would be content with Wade opting in for next season, then re-signing for good, but not huge, money for another two seasons after that."

As a fan, I want Dwade to stay because he has been the face of the franchise and has lead them in points, assists, steals and games played. But if he doesn't get paid I am pretty sure there's a lot of possible destinations for him.