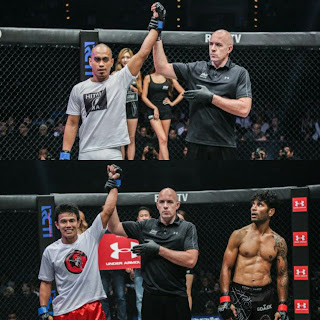 Burn 'Hitman' Soriano started the One Championship 46 preliminary with a BOOM! on August 27 at the Jakarta Convention Center. In 15 seconds Mario Satya Wirawan of Indonesia who holds the fastest KO record (6 seconds) was knocked out by the Filipino warrior with a vicious spinning backfist in the first round. Soriano bounced back from his One Championship debut loss to Sunoto last April and this is the first knockout of his career.

Fight night made when another pride of the Philippines Edward "The Ferocious" Kelly of Team Lakay knocked Vincent Latoel out with a powerful punch after countering him in round two. Kelly's sidekicks were hurtful to watch. Latoel responds with the same and gave the Filipino some knees. But Edward was real ferocious and put him to sleep. Kelly has now won two straight over strong and experienced opponents in the featherweight.

And yes Luis "Sapo" Santos will again face Ben "Funky" Askren for a welterweight championship bout after his unanimous decision win over former middleweight champion Igor Svirid. Santos' ground and pound with elbows broke Svirid's nose until the buzzer sounds. In round three, Igor came back furiously as he put Luis on the mat and pummeled him. He was not able to finish the welterweight contender though.

Below are the results of One Championship 46: Titans and Titles:

Middleweight: Marcin Prachnio def Jake Butler by TKO in round 2

Featherweight Edward Kelly def Vincent Latoel in round 2 by KO

Featherweight: Anthony Engelen def Sami Amin in the second round by submission (RNC)

Bantamweight: Bernard Soriano def Mario Wirawan by KO in round 1