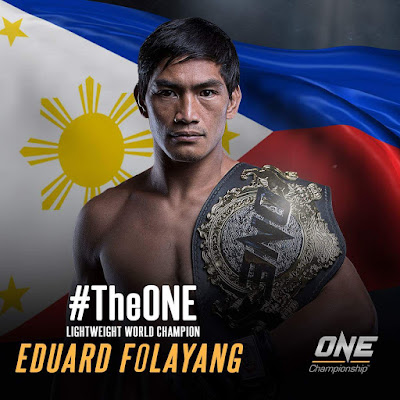 12 November 2016. The day the Philippines and Filipino fight fans were treated to a night of unforgettable fight as EDUARD LANDSLIDE FOLAYANG defeated MMA legend Shinya Aoki via TKO in a 5-round battle to claim the ONE Championship LIGHTWEIGHT WORLD TITLE in Singapore with ONE: DEFENDING HONOR at the Singapore Indoor Stadium.

Eduard Folayang put Baguio City's Team Lakay three years title drought in an end and brought the belt back to the land. The Landslide gave Philippines the third world champion in ONE Championship honor and prestige. Folayang have once again made us Filipinos proud.

The Filipino and Japanese warriors went back and forth in the ground and stand up duel. The finish came in the third round as Aoki's face planted on the canvas taking unanswered relentless punches from the face of Philippine MMA. The referee had to stopped the fight.

In the co-main event of the night, ONE featherweight champion Marat Gafurov outlasted Narantungalag Jadambaa via submission for the second time. Gafurov won the interim title from Jadambaa in their first match up at 2015 ONE: Dynasty of Champions. Last night, Gafurov unified the featherweight title and stay undefeated by choking Jadambaa out in the fourth round.

Amir Khan defeated Vaugh Donaire from Philippines via submission. The kimura was a crazy and scary moment in their fight. Amir survived and then escaped it. Khan pulled off a rear naked choke in the clinch and pulled guard to finish the fight. Donaire is a former URCC champion, who holds a purple belt in BJJ and is a veteran of 13 fights.