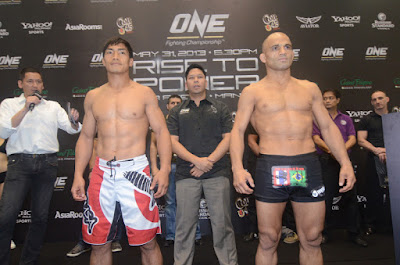 Kamal “Prince of Persia” Shalorus and Eduard “Landslide” Folayang stood opposite each other inside the ONE Championship cage nearly four years ago when the Iranian combatant fought the Filipino mixed martial arts (MMA) superstar in his promotional debut.
Both men squared off against each other inside the jam-packed 20,000-capacity SM Mall of Asia Arena, serving as one of the featured attractions of ONE: RISE TO POWER in May 2013.
Shalorus utilized his wrestling background efficiently against Folayang to get the unanimous nod from the three judges at cageside.
Since their grueling three-round lightweight contest, Shalorus and Folayang have never seen eye-to-eye. Moreover, a lot of things have changed in their respective professional MMA careers.
Shalorus decided to have a time off as a prizefighter after yielding to Shinya Aoki for the ONE Lightweight World Championship belt via first-round submission in August 2014.

Meanwhile, Folayang won five of his last six ONE Championship outings since his defeat to Shalorus, including a shocking third-round stoppage victory over Aoki last November to capture the gold-plated strap.
With Folayang having ONE Championship’s top prize at lightweight, Shalorus seeks to cross paths with the famous Team Lakay representative again.
“A lot of things have changed. The division had a major facelift. There are more talented fighters in the division right now. Aside from all of that, lightweight has a new champion,” he stated.
“Eduard and I had a history. We fought before in ONE Championship. I hope we can meet again, but this time it’s for the title,” Shalorus added.
Shalorus admitted that he is fully aware of Folayang’s recent career resurgence as the 33-year-old Baguio City native managed to reinvent himself by transitioning from a pure striker to an all-around MMA fighter.

As seen in his last three bouts in ONE Championship, Folayang displayed on-point sprawls and his ability to sinuously execute sweeps and guards, as well as his sturdy top control on the mat.
“Eduard has improved greatly. He has now a good takedown defense and has exhibited good control on the mat. He is more of a complete fighter,” Shalorus said of Folayang.
The 39-year-old Iranian veteran believes that a win in his upcoming will be the first step in securing a rematch with Folayang.
After almost three years sitting on the sidelines, Shalorus returns to the ONE Championship cage to face Malaysian-Kiwi standout Ev Ting in the main event of ONE: THRONE OF TIGERS, which takes place at the 12,000-capacity Stadium Negara in Kuala Lumpur, Malaysia on 10 February.
“I believe this fight against Ev Ting will help me to get there. I still dream of becoming a world champion in MMA. Eduard is the one holding the title. It’s a must-win for me if I want to vie for the world championship again,” he stressed.

Shalorus sees a much tougher encounter with Folayang if he will get the chance to have a rematch with the reigning ONE Lightweight World Champion. However, he is confident that he will have his hand raised against his Filipino rival once more.
“I believe it will be more difficult because he has showed improvement. Eduard has now a good ground game and more intelligent. But I know I can still win against him,” he ended.
​For more updates on ONE Championship, please visit www.onefc.com, follow on Twitter and Instagram @ONEChampionship, and like on Facebook at https://www.facebook.com/ONEChampionship.
About ONE Championship™
ONE Championship is the largest sports media property in Asian history. Headquartered in Singapore, the world’s most exciting mixed martial arts organization hosts the largest sports entertainment events across Asia featuring the best Asian mixed martial artists and world champions, all signed to exclusive contracts, on the largest media broadcast in Asia. ONE Championship is broadcast to over 1 billion viewers across 118+ countries around the world with some of the largest global broadcasters, including FOX Sports, Setanta, MNC, Astro, Thairath TV, ABS-CBN, TV5, MYTV, HTV, OSN and more.
Labels: Eduard Folayang Ev Ting Kamal Shalorus MMA One Championship One FC Throne of Tigers