4 Wins in a Row! Road Warriors Shoots Down Phoenix in 4 Glaring Stats

The Road is clear for NLEX as they continued to win games. 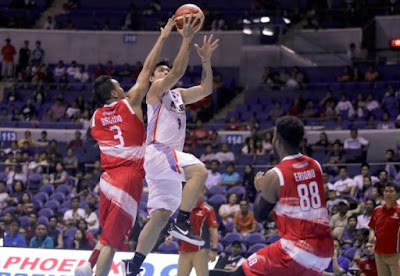 The Road Warriors is a renewed team as they now enjoys a 4 game winning streak in the 2017 PBA Governors Cup.

Currently, atop of the standing, the Road Warriors must be really happy with their performance early in the conference. They have so far withstood all challenges and rose up against them.

Last night, Phoenix fell against the Road Warriors in a closely contested ball game which was decided in the last few minutes of the game.

Phoenix import Phelps had a game high of 31 points while Matthew Wright added 17 but their production weren't good enough to halt the streak of NLEX.

There were 4 glaring stats that ultimately gave the Warriors the win:

- NLEX ruled the board at 65 against 46
- Phoenix sucks at the free throw line at 56%
- The paint belongs to NLEX scoring 56 against 40 of Phoenix
- NLEX got some boost from the bench with 53 points against only 37 of the Fuel Masters.