A Wheeler's Opinion: Was It Right for TNT to Call Chito Narvasa "Biased" for Standhardinger Saga?

Here's why it's right and not 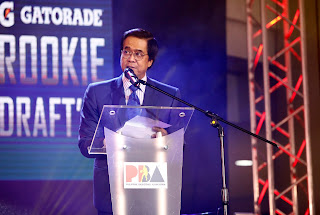 PBA Commissioner Chito Narvasa was called "biased" by the KaTropa management in a statement. (Photo by the PBA Media Bureau)

Even though he has yet to play a single second in the PBA and won't play until he completes his stint in the Asian Basketball League, Christian Standhardinger, the top pick in last night's 2017 PBA Rookie Draft, has become the hottest topic over the last few weeks.

To begin with, he was one of the last applicants to submit his application for the draft. He then missed the Draft Combine where he could have showcased why he is indeed, the most sought-after rookie which almost caused him to be disqualified from joining the draft.

But perhaps, nothing could have made Standhardinger as the most talked-about rookie than the trade involving the Kia Picanto sending the rights to pick Standhardinger to the San Miguel Beermen for bench warmers, future draft picks and cash. Due to the lopsidedness of the said deal, many were puzzled land were asking the same question: "What is wrong with Kia?"


Despite concerns from other PBA teams, the good PBA Commissioner Chito Narvasa approved the trade anyway and Christian Standhardinger walked out of Robinson's Place Manila with a Beermen jacket.

Just when everyone thought that the Stanhardinger Saga could be finally buried, nope.

Apparently, the Beermen wasn't the only team who was trying to trade for the number one pick.

As it turned out, the Beermen just beat the Talk N Text KaTropa to the rights of picking Stanhardinger and incidentally, the KaTropa through an official statement released to the public, questioned the statement made by Commissioner Narvasa just a few hours prior to the Game 7 of the PBA Governors' Cup Finals, saying that it was TNT's team official, Magnum Membrere who initially submitted Standhardinger's application to join the draft.


Apparently, the statement made by the good commissioner, according to TNT's statement, proved that Commissioner Narvasa was biased. Talk N Text also mentioned that Narvasa mentioning the name of their team official was meant to help him explain, justify his decision to eventually approved the widely-questionable deal between SMB and Kia.

Was it even fair to call the good Commissioner Chito Narvasa "biased" for his statement? Let's take a look at the points:

TNT has a point

Simply put it this way, folks:
With all due respect to the good commissioner of the PBA, what he just allowed to happen, was a show of disrespect not just to TNT or the other teams but, to the rest of the PBA. It can send the wrong message to future draft aspirants that they can do such things in the PBA and they can walk away from them.

It's simply unacceptable. It's also questioning the priorities of Standhardinger who has an upcoming stint in the ABL which is the main reason why the Beermeen can't utilize him for the big chunk of next season.

No. It's Totally Disrespectful

To call Commissioner Chito Narvasa "biased" is to question the integrity of the entire institution that Mr. Narvasa is representing.

With all due respect to the officials, players and fans of the KaTropa, there was no need for such a statement. Sure, Chito Narvasa was in Lebanon to support the Smart Gilas Pilipinas during the 2017 FIBA Asia Cup and invited Standhardinger to join the draft. Would it be nice for Narvasa to offer a little flexibility with regards to the rules to a player who contributed a big amount of effort during that tournament and the ensuing 2017 South East Asian Games where Gilas dominated, anew?

Sure, Standhardinger's not applying on his own and missing the Draft Combine, sends the wrong message but Chito Narvasa is only doing what he could to help Stndhardinger get into the big league. After all, once Stanhardinger suits up and teams up with 4-time MVP award winner, June Mar Fajardo, we can expect bigger crowd during the games of the Beermen.

The Standhardinger Saga is not yet done and is far from over. One thing is certain, we can expect a statement from the good PBA commissioner and TNT should watch out because Chito Narvasa loves to hand down hefty fines to teams, players and coaches who say disrespectful things towards the PBA, in general.