Rumor of Ayo's Move to UST Continues to Make Noise

A Wheeler's Opinion: Aldin Ayo to UST: Will it Happen? 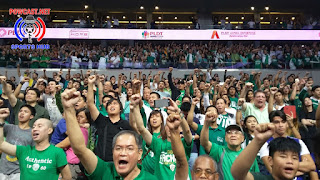 Rumor has it that some alumni of La Salle have grown "unhappy" with Ayo.

Aldin Ayo came to the De La Salle Green Archers right after leading the Letran Knights to an NCAA championship in 2015. And Coach Ayo wasted no time as he led the Archers in winning the first 13 games of the UAAP Season 79 before surprisingly dropping the last game against the equally-surprising Ateneo de Manila Blue Eagles that denied La Salle an outright Finals berth.

Both teams went on to meet again in the Finals which was won by La Salle of course, in two close encounters. That made Aldin Ayo the first coach to win two consecutive championships from the NCAA and the UAAP.

Fast forward to Season 80 of the UAAP, Ateneo and La Salle will meet again in the Finals which kicks off with Game 1 this Saturday.

Ateneo, like La Salle did last year, blew the chance of sweeping the 14-game elimination rounds after dropping the final game against La Salle. Then, the Blue Eagles had to survive a do-or-die game against the Far Eastern University Tamaraws before sealing the ticket to the Final dance with Ben Mbala and the rest of the defending champions.

As both teams are busy preparing for another Finals clash between two fierce rivals, a rumor came out from various media outlets. The rumor: Aldin Ayo will take over the head coaching job at the helm of the UST Growling Tigers- a team that dropped its first 13 games before holding on to a win during the final game against the UE Red Warriors.

Wait! What? Aldin Ayo to UST? If you are to believe the rumor, yeah. The current La Salle coach is on his way to Espana.

But will it happen?

Let's be realistic, folks. You're winning in La Salle. You're about to coach in your 3rd consecutive Finals in 3 seasons and you are poised to win another championship. And as far as La Salle officials are concerned, Eduardo "Danding" Cojuangco- the man who was behind bringing Ayo to Taft, is happy with Ayo at the helm of the Green Archers- that he is very happy with the huge amount of success that the team is currently enjoying despite notable losses this season. So generally speaking, it's impossible for Aldin Ayo to make the move to Espana anytime soon. There's simply no reason for him, at the moment, to make such a move.

Nobody thought that Aldin Ayo would move to La Salle until it actually took place. Having said that, La Salle fans can only pray that this rumor will stay as a rumor because whether we like it or not, anything can happen.

UST is in need of a new coach to make the Tigers competitive again. And assuming the Ayo move materializes, it will need more than just a coaching change for UST to become competitive again come Season 81. But the question is: will the move materialize indeed? We'll need to play the wait-and-see game.
Labels: aldin ayo Basketball De La Salle University Green Archers Iggy UAAP UAAP Season 80 UST Growling Tigers