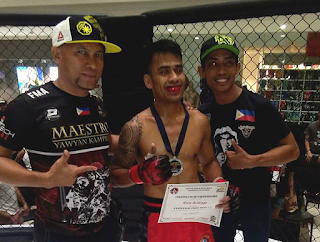 
The First Ever MMA Event at the Ayala South Park Mall ended with a bang as Enzo Artilla of Yaw-Yan Kampilan/ RMA Gym immediately disposed of Mark Bie with his power punch that put his opponent down for good. Referee Reiner Gervacio had to step in and stop the fight at 1:07 in the first round to prevent further damage. This was the main event of an explosive and action-packed MMA event promoted by Rupert Arciaga's RMA Gym/ Promotions.

In partnership with the local government unit of Muntinlupa headed by Mayor Jaime Fresnedi, the second MMA event in Muntinlupa was held at the new Ayala South Park Mall in Alabang. This was the second time the RMA Gym and Muntinlupa City has partnered as they made history early this year by holding the first-ever MMA event in the City at the Muntinlupa Sports Complex.

The City of Muntinlupa has seen a lot of growth in recent years with infrastructure and improvements which made it one of the progressive cities of the Philippines. The city has also been making news by hosting different kinds of events and supporting local sporting events like the Centennial Fight Night.

Here are the last 3 fights of the night.

For complete results and videos of other fights please visit: https://www.facebook.com/pg/rmagympromotions