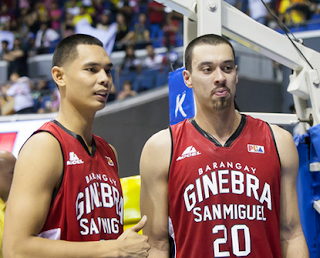 Despite Magnolia's loss on Christmas Classico, it turned out to be a healthy one. They seem to have drawn a trump card concealed inside their deep deck. A duo who could stop and counter the force of the threatening era of the twin towers of San Miguel and of course their recent opponent, Brgy Ginebra.

Facing the Brgy Ginebra squad is and will always be an ultimate test of character. Talking about Greg and Japeth combination, the shaded area seems to be preoccupied all the time due to this enormous beasts.

However, the Hotshots somehow kept up with the very dense Ginebra interior. The wall-like defense of the twin towers became the key for Hotshots to unlock their hidden weapon that could match the towers.

Smaller but still with power

Who can be able to stop the Pinoy Sakuragi Marc Pingris whenever he post-ups. He's a great match against Japeth Aguilar despite the height disadvantage. Ping just outwits size with strength and agility. Another good thing about Pingris is that he could deliver one-handed floaters -- a great way to shoot over huge players.

Slaughter might be the biggest player but still, he's not the only big man existing in the league. Magnolia's roster has a smaller but way faster and athletic player. Ian Sangalang hustled in their recent game both offensively and defensively.

If Slaughter's advantage were size, Sangalang's got the speed. He could run in transition and finish fast breaks. In addition, fast breaks are twin towers' weakness due to the high pace of the transition which they commonly could not keep up. Therefore, Sangalang can be considered the biggest man in terms of transition baskets.

You may never win in a head to head battle against players way bigger than you are but there is always some weak points that when taken advantage of, will be very effective and fatal. The key to outplaying the twin towers is through individual agility and team's high offensive pace.
Labels: Basketball Brgy Ginebra San Miguel Featured Greg Slaughter Ian Sangalang Japeth Aguilar Jasper Magnolia Hotshots Marc Pingris PBA