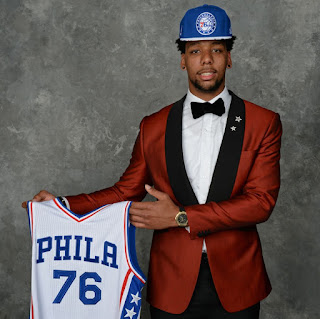 Philly wanted Russell so bad because they already have Embiid, Noel and Saric as their front court. Due to the fact that Lakers picked Russell, they had no choice but to draft the best player available. At first I felt a little bit uncomfortable with how the 76ers is running their organization. On the other hand Okafor and Noel will compliment each other well, while Embiid is still on a healing process. For Okafor though, he might need to trust the process as well since they might not win many games this year even if Embiid is to come back this season, the bright side is let's say Saric might play after this season, that makes Noel an intriguing prospect for next year's draft since the best big man next year might be Skal Labissiere after that its a bit weak compared to the big's in this year's draft.
The combo of Embiid and Okafor could be the force to reckoned with for years to come barring injuries.

The fans and the current players though will have to see this team in the top 3 pick again next year,

Here is the introductory press conference of Okafor: Courtesy of Jory Peto NBA.

There were not a lot of smiles from Okafor, although it may be his personality but hush young fella you still have a young career and if Embiid recovers 100% free agents would want to play for the 76ers.