This girl is on fire 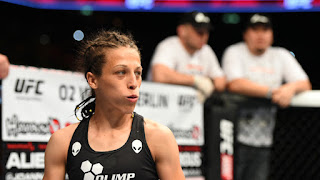 Jedrzejczyk proved again Saturday in Berlin that she’s the UFC strawweight division’s version of Ronda Rousey. With a little bit of Conor McGregor thrown in.

Jedrzejczyk’s three-round dismantling of No. 3 contender Jessica Penne follows a dominant knockout of Carla Esparza at UFC 185 in March. She took the championship belt from Esparza, defended it against Penne and appears unbeatable in the 115-pound class, at least until a new challenger steps forward.
Asked afterward is she had an opponent in mind for her next bout, Jedrzejczyk replied, “Are they ready for me? No.”