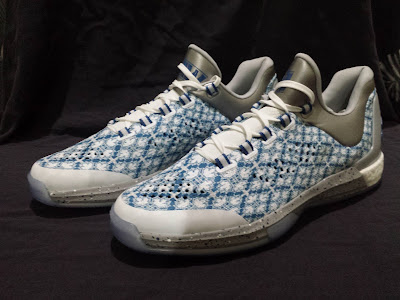 adidas Philippines released the 2015 Crazylight Boost Primeknit on July 1st across different stores and retailers in the Philippines, and the sneaker has been met with positive responses. I had been looking forward to the release since it seemed like it's a very big improvement from last year's Crazylight Boost. After spending a couple of weeks contemplating on which colorway to cop, I finally decided on the Andrew Wiggins "Home" PE, mostly because they look so good and partly 'coz it's a limited release.

Let's take a closer look at the shoe that the reigning Rookie of the Year will wear for his home games during the 2015-16 NBA season.

Eye-catching, without a doubt. The colors used, the maple leaf design on the knit (an homage to AW's Canadian roots), the icy sole, and the overall color blocking on this shoe makes them pop. They look sleek and icy-cool, the silver and blue just so pleasing to the eyes. 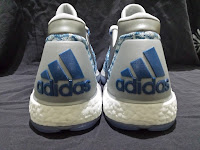 adidas has started a trend of big branding on their basketball sneakers, and it continues in the 2015 Crazylight Boost. Personally, I like the in-your-face logo, and the triangular shape of the stripes follows the contour of the heel area smoothly when viewed from behind. The meaty Boost midsole is clearly visible and just looks like it will absorb any impact. The rear of the ankle collar sits just right, not too low or too high to cause chafing.

I'm in love with the silhouette, the lines, the color blocking, and the colors adidas used on this model, and I'm not alone. I've gotten a ton of compliments on the shoes each time I wear them on court. The way it looks alone is enough of a convincing factor for most people to purchase the pair. 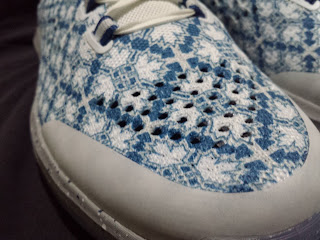 Premium materials are used on this model, especially the Primeknit. Looking closer, there's a combination of tight and loose knitting that serve both performance and aesthetics, but more on that later.

From afar, the pattern on the Primeknit upper looks like a variation of snakeskin, but upon closer inspection are actually maple leaves in diamond patterns. Well executed design, adidas.

Now let's move on to the meat and potatoes...

These run true to size, although one of my friends decided to go a half size down. I went with a size 12 instead of my usual 11.5 (I have really wide feet) and found them to be very comfortable. Some extra space in the toe box, but I like that extra space in my on-court kicks, so it didn't bother me one bit. 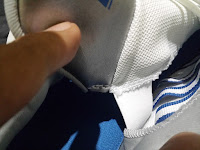 The tongue is sewn to the upper on the lateral side, which is the first time I've seen it on an adidas shoe. Think KD6, except the tongue on the CLB15 goes under the upper as opposed to over like in the KDs. The tongue is thin, very breathable, but with a downside—lace them up too tightly and you'll definitely feel the lace pressure.

There's an elastic band that holds the medial side of the tongue in place to prevent it from sliding off to the side too much. 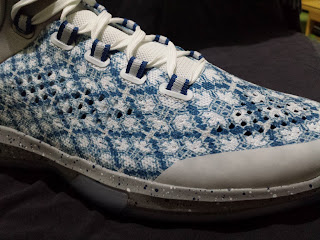 The upper is a one-piece knit that has varying degrees of density, depending on the area it's used on. Looser knitting, such as in the toe box and the side panels, allows for flexibility and ventilation, while tighter knits provide stability and support.

Overall, I like how the pair feels. Go true to size if you plan to purchase, since people with normal foot widths have given feedback that the forefoot and toe areas have too much space. 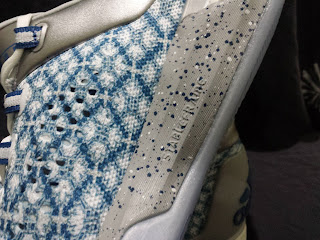 Stableframe is used on the 2015 Crazylight Boost to provide a bed to keep the foot in place. It serves to keep the shoe extremely lightweight but supportive.


I didn't feel any excessive restrictions from the Stableframe except to hold my foot in place, and there was no pinching or rubbing like in the old Sprintframe that adidas used a couple of seasons ago. There's a TORSION-like plate embedded in the midsole which allows for a very smooth heel-to-toe transition while running up and down the court. 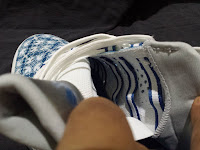 The lace loops on the outside are part of the bands pictured on the right, which help hold the foot in place once laced up. I like the added stability this feature gives since the foot's locked down in the area I want it to be the most stable.

If you're worried about too much pressure or possible chafing, my ultra-sensitive feet didn't feel the bands rub or press against my foot during play. 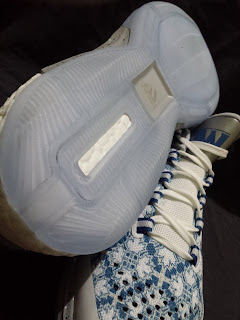 Boost. Boost. Boost. 13% more than last year's model, extended farther into the midfoot. I love Boost and I was ecstatic with the upgrade. This is simply the best cushioning system in the market right now, and adidas took what worked in last year's Crazylight Boost and made it even better in the 2015 iteration.

adiPRENE+ is used in the forefoot area, again another big upgrade from the 2014 version. adiPRENE+ gives the shoe that added forefoot bounce that was missing in last year's model. Changing directions and quick cuts need not be as hard on your toes and the ball of the foot now because of this change. Thank you adidas for listening to your consumers.

I'm a 5'9", 240-pound guy who plays 2, 3, and 4, and the shoe performed as advertised in the cushioning department. Some say that the insoles are too thin and recommend swapping them out for thicker insoles for more comfort, so I experimented by adding an Ortholite insole on top of the factory ones. The cushioning was definitely better, but somehow court feel is sacrificed. I had one run with the Ortholites and decided to just go with the factory ones alone. No problems so far.

The traction pattern used on the CLB15 is a bigger, wider herringbone. The rubber is soft and pliable (like in the midfoot outsole of the D Rose 5 Boost), so I immediately expected good grip. I wasn't disappointed. 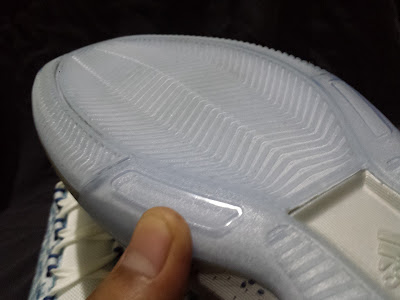 I played on two dusty courts over the weekend and had no traction issues. Didn't slip, had the purchase I needed to get off pull-up jumpers and catch-and-shoot Js, was able to change directions with ease, and toe-offs on drives to the hoop felt grrrrrreat.


The problem I have with the outsole is durability. Much like car tires, softer compounds offer higher grip but get worn down much faster. The grooves are shallow, and I don't know how long these will last before traction diminishes. If you play outdoors on rough surfaces, it's best to look for other options.

At PhP 7,995, it's not the cheapest option on the market, but the technology put in the shoe more than justifies the price tag.

The 2015 Crazylight Boost Primeknit is one of the most comfortable shoes I've ever played in. I've spent the past few years searching for a model that offers the fit and cushioning I need, often resorting to retros since the newer models were too narrow for my wide feet and sacrificing cushioning in the process. With the Crazylight Boost, I got the best of everything, from the cushioning to fit and lockdown to traction to neck-breaking good looks.

These CLBs will definitely see a lot of court time, and I'm already looking forward to the "Away" colorway, which I've heard will drop sometime in the next two months. As we sneakerheads like to say, AUTOCOP.