Azkals wants you to support their home game against Uzbekistan, tickets details! 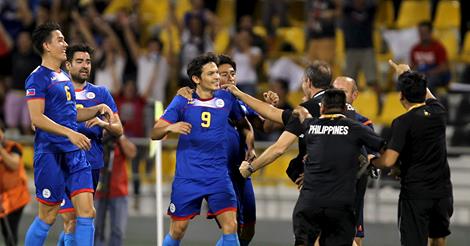 OTHER TEAM MATCHES IN WORLD CUP QUALIFIERS TO BE HELD ABROAD

21 July 2015 – Manila: The Philippine national football team is scheduled to play only three more games in the country in the ongoing qualifiers for the 2018 FIFA World Cup as the rest of its matches will be held outside the Philippines.
“Let’s take advantage of the hometown matches by watching the Azkals play in person. The Azkals will be playing for the country’s honor. The fans’ support will count a lot,” Team Manager Dan Palami said.

The next Azkals game is scheduled on September 8 against a tough Uzbekistan squad at the spanking Philippine Sports Stadium in Bocaue, Bulacan. Kickoff time is at 8 p.m.

Palami said playing before a home crowd will be motivating for the Azkals, especially if the players see the all-out support of fans turning up in droves for the games.

“We are fortunate to see our Azkals playing more home games, unlike in the 2011 qualifiers where they had only two home games,” he said.

For the ongoing World Cup qualifiers, the Azkals were lined up to play four games in the Philippines -- with the first game already held last June 11 against Bahrain at the Philippine Sports Stadium -- and another four games outside the country under a round robin format. The first home away game of the Azkals happened last June 17 in Doha, Qatar, when it trounced Yemen, 2-0.

After the September 8 game against Uzbekistan, the next Azkals matches in the country are on November 12, 2015, against Yemen and onMarch 29 next year against the Democratic People’s Republic of Korea (North Korea), both at the Philippine Sports Stadium.

The rest of the Azkals games scheduled outside of the country are on October 8, 2015, against the Democratic People’s Republic of Korea in Pyongyang; on October 13, 2015, against Bahrain in Manama, and on March 24 next year against Uzbekistan in Tashkent.

There are eight groups with five teams each. The top team in each group plus the four second-best teams to be determined by goal difference across all groups will advance to the next round. The Philippines, Uzbekistan, People’s Republic of Korea, Bahrain, and Yemen are in Group H.

The 12 teams will compete in the 2016 qualifiers, which will determine the final group for the World Cup in 2018 to be held in Russia. The 12 teams will also automatically qualify for the 2019 Asian Cup.
“Our ultimate goal is to play in the World Cup, the most followed sporting event worldwide and which is every nation’s dream,” Palami said.