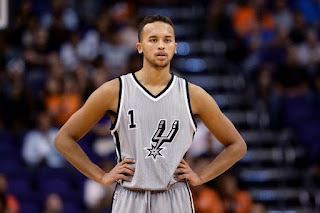 The NBA made Kyle Anderson the latest MVP for Summer League 2015. It is a good sign for the Spurs after losing Marco Bellinelli. Anderson averaged 22 points, 5.8 rebounds, 1.5 assists and 1.3 steals in Las Vegas,  and led his team to the Summer League Finals against Phoenix Suns on later today. (9pm EST). This maybe the time that he can be inserted into the rotation after playing his first year in the NBA D-League for the Austin Spurs. If everything falls into place I see Anderson as a Boris Diaw type of player maybe better shooter and passer.

With that said let's all marvel at his performance that led his team a shot at the finals: