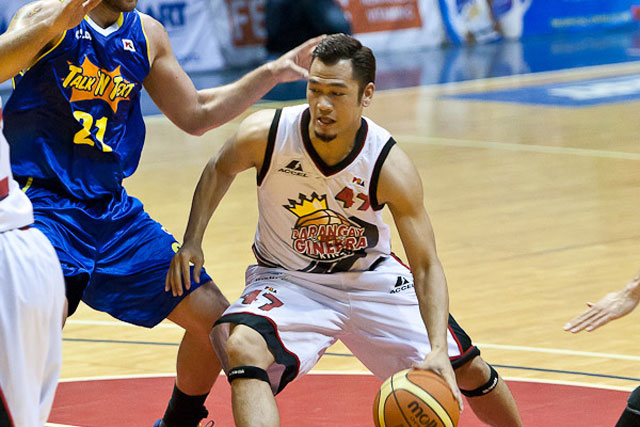 A 35 year-old Barangay Ginebra superstar  Mark Anthony Caguioa was born on November 19, 1979 in San Juan, Metro Manila. He was drafted last 2001 by Barangay Ginebra in third overall pick in first round.

When Jayjay Helterbrand returned to PBA last 2004  the two backcourt tandem in PBA gave back-to-back championships to Barangay Ginebra. Their tandem was known as "The Fast and The Furious". In  2004 PBA Fiesta Conference, Caguioa set his career high of 43 points during this season.

Caguioa is the first ever guard to finished a single season as the league's leading scorer after Allan Caidic in 1995. He is also the third Ginebra Player named as the Rookie of the Year award after Dondon Ampalayo 1986 and Marlou Aquino 1996. Mark Caguioa known as the "The Spark" or MC47.

"The Spark" is known because of his killer crossover moves, tear drop shots, slashing drives to the basket, pull-up jumpers and hitting the crucial shots.

Some PBA players idolized Mark Caguioa like Jay Washington, Terrence Romeo, Paul Lee and Mac Cardona. They mentioned that Caguioa was -- "Mark Caguioa is a classic player", "I admired him since I was playing in UAAP and I adopt his crossover moves" and one player stated that "When I saw Mark (Caguioa) doing the tear drop shots, I started copying that shot".

Here are the awards and career highlights of MC47.


With coach Tim onboard Ginebra fans will expect more of these awards.