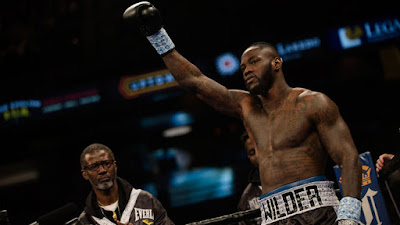 The Bronze Bomber Deontay Wilder stays perfect as he stops Gerald Washington at 1:45 of 5th round to retain his WBC Heavyweight World Title in Alabama. Wilder improves record to 38 wins 0L with 37 knockouts,

Wilder (38-0, 37 KOs) was tentative and immobile to start the fight, staying stagnant and allowing Gerald Washington (18-1-1) to keep the pressure on with his jab and counterpunches. But in just a flash, Wilder ended the fight with a flurry. Washington dropped like a sack of potatoes into the ring ropes and continued to fight for a short time before the ref finally called off the action. - reported by CBS Sports.