How a Kawhi Leonard to Boston Scenario could Happen? 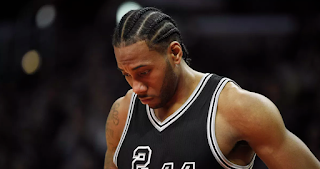 Believe it or not, the Spurs are reportedly willing to give up Leonard for 3 players.

Over the past few weeks, rumors surrounding the future of Kawhi Leonard with the San Antonio Spurs have been popping the social media and in the NBA talks.

To begin with, the former Finals MVP has only played 9 games this season as he has recently recovered from the injury that he sustained during the last playoffs. Then, he was taken out, possibly for the rest of the regular season.

Then, came along the rumors which said that Kawhi Leonard has grown unhappy with how the Spurs management has been handling his injury rehabilitation. While both camps have already denied such rumors with General Manager RC Buford even stating that there is no issue between the Spurs organization and Kawhi Leonard, the rumors won't just stop, of course. In addition to this, Jalen Rose said that one of the factors as to why Leonard has grown unhappy is the fact that the Spurs have miserably failed to attract elite-level players to play alongside him. That, if you believe Jalen Rose. But frankly, if it's true that that's the reason, then it makes sense because with Tony Parker demoted to being a bench player, Leonard is the only star on his team alongside LaMarcus Aldridge.

Trade rumors are starting to make noises. If you are to believe Jalen Rose, the Spurs are apparently willing to trade Kawhi Leonard for 3 players from the Boston Celtics who are leading the Eastern Conference thanks to their 33-15 record. Imagine this trade:

Kawhi Leonard for either Jayson Tatum or Jaylen Brown, plus either Marcus Morris or Marcus Smart and, Aron Baynes or Guerschon Yabusele.

Either way, regardless of who the Celtics send among the mentioned players for Kawhi Leonard, it could benefit both sides. Kawhi can now get the chance to start anew with Kyrie Irving, Al Horford and soon, Gordon Hayward. On the other side, Tatum and Brown are two promising young players who can provide youth to the Spurs. Both Morris and Smart are proven veteran that can help the young ones grow. The addition of either Baynes or Yabusele could furthermore deepen the depth in the frontline of San Antonio.

The Celtics will become a better defensive team should it successfully acquire Kawhi Leonard. While the trade prospect remains a rumor, for now, we shouldn't be surprised if this trade happens soon. Why? The said trade prospect is good for both teams and San Antonio has been known as an organization who makes the right decision. And as it is, they will eventually come to realize that if Kawhi Leonard, despite all of those denials, is no longer happy, then why you should keep him?
Labels: Al Horford aron baynes Basketball Boston Celtics Gordon Hayward Iggy Jaylen Brown Jayson Tatum Kawhi Leonard Kyrie Irving Marcus Morris NBA nba trade rumors San Antonio Spurs